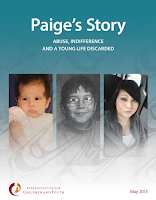 As we outlined yesterday, North Coast MLA Jennifer Rice was one of a number of NDP MLA's that had taken to the Legislature floor this week to ask questions or comment on the case of the death of Elizabeth Wiens, a young infant in the care of the Ministry of Children and Family Development.

And as emotionally charged as the questions of earlier in the week on that case file may have been, a disturbing new Report into another tragic situation in British Columbia is bound to make for many of the Opposition NDP's discussion points when the Legislature returns to work later this month.

It makes for a review that delivers an account of incomprehensible decisions and actions that in the case of Paige, is something which Turpel-Lafond says provided for one of the most troubling investigations that her Office has ever conducted.

That is a statement that tells us quite a bit about how this case should be received, considering some of the previous reviews related to Child protection that Ms.Turpel-Lafond's office has offered in the past.

The report traces the tragic circumstances that seemed to have made up much of the life of the young aboriginal girl, leading up to her death of a drug overdose at the age of 19 in April of 2013.

Among the findings from the report was the collective failure by multiple organizations and individuals to take action that could have helped Paige, despite many opportunities for those with the ability to effect change to do so.

The report takes the reader through some horrible situations that no child should have had to endure, most of which occurred in the Downtown East side of Vancouver.

The review makes us part of the ongoing thread of those life altering moments for a young girl, a story that ends in a life cut short far too soon.

Ms. Turpel-Lafond's report outlines six recommendations, the first one highlights the nature of the breakdown of a system that is supposed to protect those that are the most vulnerable

That the Province of British Columbia, led by the Ministry of Children and Family Development, respond forcefully to the persistent professional indifference shown to Aboriginal children and youth by many of those entrusted to work in this field, including some social workers, police, health care workers and educators. The Province and MCFD must also show a greater commitment to permanency for Aboriginal children and renewed efforts to work with family members when a parent cannot provide stability or safety for a child.

That MCFD, the Ministry of Health, and the City of Vancouver conduct an urgent review of the current provision of services – including child protection, housing, health care and substance use treatment – to vulnerable children in Vancouver’s Downtown Eastside.

That the Attorney General of British Columbia provide the public with a clear explanation as to why agencies and service providers are persistently permitted to fail to report harm and abuse, as was the case in Paige’s experience, contrary to the CFCS Act.

That MCFD, the Ministry of Education through its own initiative and with its partners, and the First Nations Education Steering Committee work together to create a system that ensures attendance at school by all Aboriginal children in the care of MCFD is closely monitored and encouraged, that MCFD actually fulfills its role as an active and engaged parent with regard to the education of these children, and that the Ministry of Education and school districts ensure that a flexible and adaptive system, including active outreach to vulnerable Aboriginal children not currently attending school, is in place and appropriately funded.

That the Ministry of Health, working with the First Nations Health Authority, take immediate steps to enhance services to vulnerable Aboriginal children and youth, particularly in the Downtown Eastside and within the City of Vancouver.

That the Ministry of Aboriginal Affairs and Reconciliation, with support from MCFD and Justice, prepare a detailed annual report for the Minister’s Advisory Council on Aboriginal Women on every unexpected death of an Aboriginal girl or woman in care, or formerly in care, in B.C. and that a review of urban Aboriginal program funding is conducted.

A full overview of the six recommendations above can be found from pages 62 to 68 of the report, each section providing detailed background on each of the points raised as part of the conclusion to the report.

Ms. Turpel-Lafond's review doesn't make for light reading on a long weekend, but the story and background to the way the child protection system seems to be functioning, or not functioning more to the point, is something worth exploring despite the uncomfortable trip you will be taking.

With a one week break way from their Legislative duties, the Provincial Government should be reviewing each of the 76 pages of the report and making plans to set in motion the process for an overhaul that clearly seems needed.

Email ThisBlogThis!Share to TwitterShare to FacebookShare to Pinterest
Labels: Report from Representative for Children and youth