City Hall ... Soon to be the new hiring hall for the North Coast

As part of Monday's Six Page Information Statement for City residents, City Council outlined some of the plans that they are putting in motion through the Planning for Major Projects portion of their new civic blue print.

Some of the newly announced push to increase civic staffing has actually already taken place, in March the Mayor announced the hiring of Dr. Barb Faggetter  as the City's New Resident Scientist.

In April, the City began the process of seeking some help for the City Planner, posting a job opportunity for a Junior Planner.

More recently, as we outlined earlier this week, two more positions have been posted to the City's website, with positions now available for an Assistant Manager of Finance and for an Information Technology/GIS Technician.

Just this week another new opening was put up on the job board, with applications now being received for a Superintendent for the Golf Course, that one could be quite a rewarding experience for one lucky candidate.

In February, as part of the Budget discussions by Council, the City's CFO outlined through documents related to Major Grants (see Attachment B) that the pay for that position was to be budgeted at 122,000 dollars per year.

It's not stated in the current City's job posting if that is still the going salary for the position. 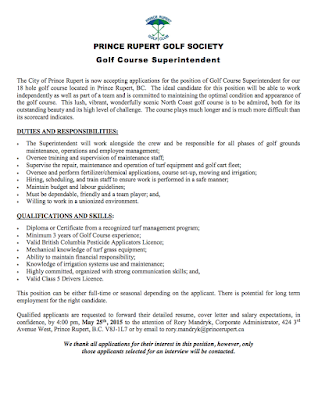 It also might be a bit puzzling for many in the city as to why the City continues to have to fund a position for the Golf Course, considering that the course it is now run by a Society which oversees much of the day to day operations of the facility.

One might think that by now, they would be responsible for costs related to its operations and be the one's to set any salary levels.

Beyond that question, if tending to the greens and fairways is not your thing, hang in there, more exciting opportunities are on the way.

Yesterday, Mayor Brain was the guest on the Daybreak North program taking part in the morning broadcast by the CBC crew which had set up on the steps of City Hall, a broadcast planned as part of the launch to Homecoming 2015.

In among some of the interesting talking points of the the eight minute conversation he had with the CBC's Carolina de Ryk, was a bit of a synopsis as to what the city hopes to achieve through its Major Project planning and the increase to the civic payroll that will come from those initiatives.

During the course of that conversation the Mayor announced that the city was commencing a search for a Communications Director, you can listen in to his thoughts on staffing plans from this audio file, the conversation related to increased staffing and salaries comes up at the one and a half minute mark through to the four minute point.

The City didn't waste any time in posting the job once the Mayor delivered his scoop to the CBC, providing the job description to the City's website later in the day yesterday.

You can review that position here.

Much of the discussion related to increased staffing took place by Council through the newly announced Planning for Major Projects initiative. Which as the Mayor noted on Monday evening was for the most part something that Council had conducted through closed door sessions of Council.

A process that to this point, hasn't provided for a full overview and open discussion in the public sessions as to why this Council believes that the growing list of new positions are required.

Nor, do we know by public vote at Council, if all six members are in step with the mayor when it comes to what he described on Monday as staffing requirements that are something that they absolutely must do to help get to a new level.

For more items related to City Council, or at least those items that are shared with the public, see our archive page here.