Some loyal CBC listeners took their concerns over local service to Prince Rupert City Council last week, providing a short presentation to Council requesting the support of the Municipal government in sending a message to CBC executives.

Katherine Palm provided an overview of a number of concerns that she and other local CBC radio listeners have when it comes to the level of service provided locally by the National Broadcaster.

As part of her presentation she provided a short history lesson for Council as to the importance of the CBC to the community and how the service provides a vital link to the region.

As well, she took time to remind Council members how past City Council's had always been engaged in efforts over the years to keep the local broadcasting operation a vital part of the local community.

As for actions, she urged Council to support the efforts of her local group and pointed to a letter writing campaign from other Mayors across Canada to send a message to the CBC.

Adding that she would like to see the City write to the radio broadcaster to reinforce to them that Northwest BC needs CBC radio coverage, separate from that of Northern British Columbia with more employee resources directed towards the Northwest, with her group recommending up to four employees locally.

Other points in her presentation noted how the local CBC service frequently promotes the community across the province and the nation by way of their news items and features.

She also offered up the theme as to how the CBC helps to promote the nature of regional cultural talent and that her group hopes to raise the expectations for the CBC and not reduce them or give up on the service locally.

She asked for Council to provide a letter of support towards the goals of her group.

The presentation also found Councillor Thorkelson in a reflective mood, as she offered up a few thoughts on the issue of CBC service in the community calling back to her early days on Council with then Councillor Basso and the group she put forward to fight for CBC Service in the late 1980's.

Adding that she hoped this Council would pick up on the current concerns and take similar action.

Council will consider the request for the letter of support at a future council session.

You can review the presentation to Council from the City's Video Archive, Ms. Palm delivers her quest for support starting at the 22 minute mark.

Ms. Palm's overview of the CBC was clearly that of a loyal listener, with no mention that there are other options available locally to receive information on the north coast, whether it be through the weekly newspaper, or private radio or television options. 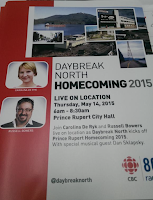 While the CBC does provide a valuable service to the region and reflects the views of many, (some more passionate it would seem than others),  the national broadcaster is not the only source of information should there be an emergency or a need to deliver view in the region.

Still, the CBC's listeners appear to be fairly engaged when it comes to what the local service offers and aren't shy about expressing their disappointment or concerns with public broadcasting in the region.

They will most likely be pleased to learn that the DayBreak North team will be setting up a live broadcast in the City later this month, all part of the Prince Rupert homecoming celebrations.

Hosts Carolina De Ryk and Russell Bowers will be on hand on Thursday May 14 from 6 am to 8:30, giving their local fans a good opportunity to drop by and share some thoughts about radio in the Northwest.

More background on local media in the Northwest can be found here.

Email ThisBlogThis!Share to TwitterShare to FacebookShare to Pinterest
Labels: CBC listeners look for expanded services on the North Coast