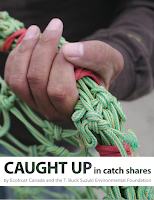 A new report put together by EcoTrust Canada and T Buck Suzuki Foundation provides a glimpse into the North Coast Fishing Industry and the nature of change that has been found in that industry since the heydays of the 1980's when Fishing was considered the thing of a gold rush in these parts.

The Report called Caught up in Catch Shares, explores some of the conditions that the authors believe have led to the current situation and a decline for coastal communities, with a fair bit of attention provided towards government decisions in recent years.

Catch 22: Conservation, Communities and the Privatization of BC Fisheries a 2004 paper on the future of fisheries policies in British Columbia.

A Cautionary Tale from 2009 which offered up eight lessons to learn when it comes to transferable quotas.

The final paper of the trilogy was from 2012 called Understanding Values in Canada's North Pacific, which examined the values that the fishery brings to the survival and well being of British Columbia's  smaller communities.

The latest addition to that collection of studies on the British Columbia fishery returns to the theme of a troubled industry and looks at issues related to the quota system in place.

Much of the overview is related to the impact of the mechanism of the Individual Transferable quota, introduced in the 1990's, and how it  has changed the nature of an industry up and down the coast.

IN THE 1980S, IN THE HEART OF NORTHERN BRITISH COLUMBIA, THE SMALL TOWN OF PRINCE RUPERT WAS BOOMING. The harbour bustled under a constant din of boat motors, screeching gulls, and the whine of fish processors running at full tilt. The smell of success, in the form of diesel fuel and fish scraps, permeated the salty coastal fog that enveloped this town of 18,000 residents.

Today, almost a quarter of the town is gone and the harbour is all but silent under the heavy mist, save for some sailboat halyards chiming on a gentle swell. Fishing boats are still tied here, but many sit listless and idle for much of the year. An unlucky few haven’t seen open water in ages and slowly crumble into the sea.

Although this is a common story on BC’s coast, hope still lives – in each quiet town, there remains a desire for sustainable fisheries to rejuvenate the local industry whose doorstep, whose shoreline, they fall on.  -- Part of an info graphic presentation for Caught up in the Catch, a review of the fishing industry on the North Coast

Caught up in Catch Shares has a strong Prince Rupert focus, looking back over three decades to when fishing was one of the major contributors to the North Coast economy and tracing the decline in the fishery for the region to a point where few boats take to the water and all but a few processing plants remain.

Since those bustling days of the eighties the commercial fleet in BC has shrunk by 60 per cent, the industry shifting from the days of individual fishermen, to what the authors call "Armchair fishermen" who buy and sell quotas, leasing them back at rates beyond the reach of most fishermen.

The 57 page review uses, charts and  Case Studies, as well as observations from those that fish the waters of the British Columbia coast to explain the impact of fishery declines on local communities.

Towards the end of the document, a timeline of Fleet reduction traces over sixty years of shifts in policies and government that have seen reductions to the fishing fleet of the West Coast.

Among some of the notes included through interviews with North Coast fishermen that appear throughout the document, is a look at a declining service industry, with boat shops, mending shops and other commercial options dwindling to few.

There closures, not only a loss of fishery related jobs in communities along the coast, but an indication of a depletion of an infrastructure that could soon be lost forever.

Key to the overview is the impact of the shift from Competitive Fisheries, to a Catch Share Fishery, something which the authors state leaves a commercial fishery that has essentially privatized access to common property fish.


The authors also issue a warning that the Salmon fishery may be next to have a transferable quota in place, noting test programs for troll and seine fisheries in 2005 and 2006.

The authors express their concerns over a full scale implementation of the ITQ, observing that the salmon fishery is too unpredictable for such a catch share system to be put in place, reviewing how statistics suggest that it is doomed to failure before it starts.

The report closes with a look at the debate over what has been a long running debate over the last number of decades as to whether the fishery in British Columbia is a sunset industry, or one that with proper policies and implementation could remain a cornerstone of local economies.

The summary of the report puts forward the main takeaway  that the authors look to leave the reader with, that of a system that has: made fishing more expensive, more complicated, and less safe. It has resulted in higher unemployment both in the industry and in broader economies, made ex-fishermen wealthier than active fishermen, reduced the number of new entrants into this sector, and limited the financial viability of future generations of fishermen.

We would argue that catch shares have essentially privatized a public resource and radically reduced the ability of smaller vessels and communities to benefit from the industry.

There is also an info graphic presentation that delivers the key points of the report, that is available here.

For more background on issues related to the Fishing industry see our archive page here.
Posted by . at 8:38 AM

Email ThisBlogThis!Share to TwitterShare to FacebookShare to Pinterest
Labels: Study into the changing nature of the BC Fishery