In final year of their mandate, City Council's list of Feuds continues to grow

As part of the ongoing narrative from Prince Rupert City Council over the course of this four year mandate, has been the  frequent theme of the city's desire to develop better relationships with regional and provincial partners.

The much mentioned goal has once again been made prominent through the city's message delivery, most recently making for part of the Budget message as outlined from the proposed five year financial plan.

However, while they may proclaim great ambitions towards that goal, it would seem that the list of those that have a beef with the City is not getting any smaller these days.

Among areas where the current City council and someone else seem to be at odds,  comes a notice that jumps out at us from the most recent report from the School District 52 session of earlier this week.

Judging by the notes of this month's SD52 Board meeting, we can probably keep the School District safely on the running list of open feuds with the City of Prince Rupert.

With Board Chair Tina Last all but writing on Mayor Brain and Council's Report card, that the student doesn't play well with the other children.

As part of the recap of the Board meeting, it was noted that the SD52 Board has tasked Chair Tina Last to send a letter to Mayor and Council outlining the School District's  disappointment over how the City handled the zoning issues related to the Kanata School property which they had hoped to have sold more than two years ago.

At the time, the School District had put the site of the closed elementary school up on the market for just under one million dollars, with hopes of redirecting the revenue it would gain towards a number of capital project priorities at the District.

In this media release from the March 6th School Board meeting, it was revealed that the original 2015 agreement with the Bryton Group Properties Inc., was now off the table as the purchaser has advised that they are unable to complete the rezoning.

A situation which now leaves the District having to return to working with their realtor to try and find another bid for the property.

The School District concerns related to the city's handling of the Kanata file actually began even before they put the land up for sale, with the District expressing its opposition to the rezoning of land below the site, back when the City of Prince Rupert rezoned the Canadian Freightways land for use as the new home for Quickload Terminals.

That early dispute seems to have set the tone for a few exchanges on issues between the School District and City over the last four years.

The notes from this week's Board meeting highlight the frustration of the School District with the City, with Chair Tina Last speaking for SD52 on the issue.

"At the public meeting of City Council, March 7, 2016, Councillor Mirau was clear that the City needed to be open for business ... The failure of the rezoning process for Kanata school property is a sad day for the district and is disappointing for a community that needs another residential development"

As he was mentioned by name in the report, Councillor Blair Mirau appears to be the one that will deliver the response on behalf of the City, with the Councillor using his Facebook portal to outline his extreme disappointment that the School District chose to direct blame to City Council. 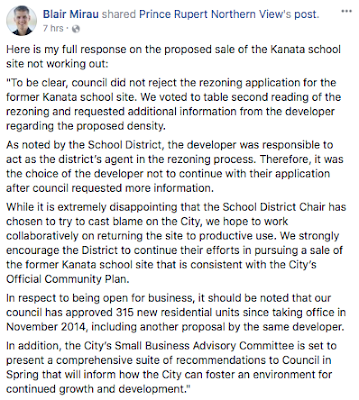 As part of his response, Mr. Mirau makes note of  some 315 units that have been approved by City Council since the current collection of elected officials took office.

However, as anyone travelling around the city would probably take note of, not very many of those  phantom 315 units have quite made it to anything resembling a construction phase yet.

With but a handful of finished units, far removed from that 315 total, making an appearance in the city as we wind down the final few months of Council's four year mandate.

You can review our back files on the Kanata story below: 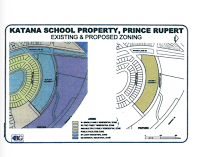 The Kanata school land issue is not the first time that the School District has expressed disappointment with the City.

Through  much of 2015 and 2016 the two groups have locked horns on the issue of the cost of a by-election to replace Judy Carlick-Pearson.

Such was the unsuccessful outcome to those discussions, that the School District has seemingly decided not to replace her and continues to run the board one person short until this fall's School Board elections.

Though, it should be noted, that the current School District Board never did make an official announcement as to their course of action on the by-election issue.

School District issues are not the only area where the City's not particularly playing well with others.

As we outlined as part of our Budget themes of last week, the City is also finding life difficult with the Provincial government.

Recently noting its disappointment in not finding any action on their requests when it comes to provincial taxation cap issues, an ongoing dispute which has seen the City going so far as to call on the public to write to MLA Jennifer Rice to express the community's collective disappointment.

Making nice with the neighbours in Port Edward is also proving to be a challenge, with the Ridley Island Tax Agreement another troublesome file, one which now seemingly will be in the hands of a provincial facilitator.

One idea that the City has floated as part of this years Five Year Financial Plan document (see page 11), is to suggest that the Port Edward share of the Ridley Island Tax Agreement should  be re-directed towards the construction of a new RCMP detachment for Prince Rupert, a bit of outside of the box kind of thinking that most likely won't be received well by the District.

Unfortunately, at no fault of the City, the renegotiation never occurred. The Province has now become involved and has appointed a facilitator to bring about an agreement between the two communities.

Based on the Districts financial statement data, the tax sharing agreement results in Prince Rupert paying approximately 50% of all Port Edward tax collected.

As mentioned earlier in this section, the City must build a new RCMP building. Preliminary estimates are that the annual debt cost to Prince Rupert is approximately $700,000 (net of estimated Provincial lease). With the understanding the local RCMP detachment benefits Port Edward, Prince Rupert, and the outlying communities, Council and staff hope to divert the Ridley Island Tax Sharing agreement funds paid to the District of Port Edward entirely towards the cost of the new RCMP detachment. This would translate into no additional cost to City taxpayers, who currently bear the primary burden of regional service provision.

With all of the bombast directed in many directions from City Hall of late,  the first task at hand for the next City Council to be elected in October, could be to engage in some significant fence mending.

One thing would seem certain, this current council group will have to run on their record of unsuccessful engagements with any number of regional partners, an evolving situation which seems to have put City Hall into somewhat of a fortress like mindset it seems.

For more items of note related to the School District see our archive page here.

A look at the work of Prince Rupert City Council can be found as part of our Council Discussion archive.


To return to the most recent blog posting of the day, click here.
Posted by . at 9:39 AM