The environmental group Friends of Wild Salmon have joined in on an online petition, calling on any Northwest residents concerned about the growing volume and potential for the future of rail transit along the Northern CN Rail to sign up to register their concerns.
The main theme of the petition, a project now directed towards the office of new Federal Transportation Minister Omar Alghabra, is toward the prospects for increased rail traffic to service current and future propane and liquid petroleum export facilities at the Port of Prince Rupert and in Kitimat.
In their petition they really concerns related to that potential increase in rail car transit and the impact it could have on communities across Northwestern British Columbia.
"Three new propane and liquid petroleum export proposals in Prince Rupert and Kitimat are set to increase the current 50-60 rail cars per day to up to 410 cars per day without a risk assessment or requirement to use the safest technology.
These trains will run through the hearts of our communities and along the banks of our wild salmon rivers, carrying both explosive products and those that are acutely toxic to fish." 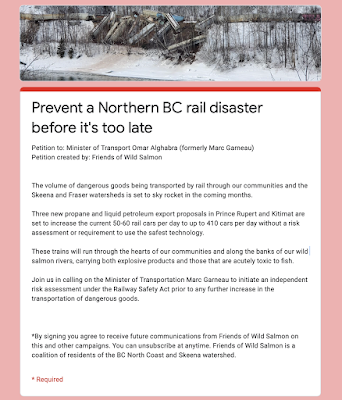 The link to the petition can be found from Friends of Wild Salmon Facebook page.
More background on their concerns over rail traffic can be found on their website.
The petition appears to have originated from a new Facebook page from an group called Safe Rail-Northern BC, you can explore their concerns here.
Prince Rupert currently hosts one propane export terminal, the AltaGas Facility, with another the Pembina terminal at Waston Island expected to come on line later this year.
Recently VOPAK Pacific Canada hosted a public engagement process towards their proposed bulk liquid fuels terminal plans for Ridley Island.
For more notes on those projects see our archive pages below:
AltaGas Terminal
Pembina Terminal
Vopak Pacific Canada Terminal
A look at past CN Rail related themes can be found from our archive page here.
Posted by . at 9:05 AM