Consideration of how the District of Port Edward may look in the future is well underway, as members of the District Council received a report this week into the findings from a fairly extensive community survey.

A consultation period which came to an end in mid January has provided Port Edward Council members with some reading material for the next little while, with the results and a large volume of comments now in from the Harbourview Neighbourhood Concept Plan. 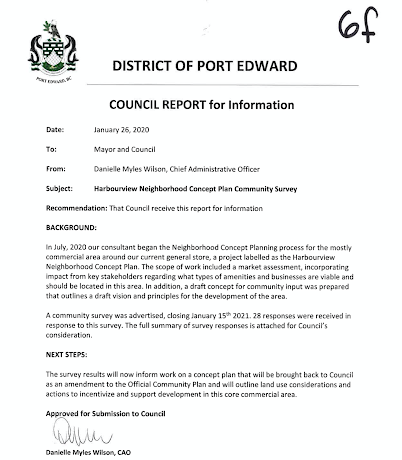 As we noted in December, the proposed area for developing is in the area of the current General Store, with a wider footprint of commercial development a possibility should the District move forward after reviewing the findings.

In total, 28 participants provided for some feedback, responding a range of  questions and offering up many observations, comments and suggestions along the way.

Among them the opening talking point as to whether it's important for Port Edward to have a Downtown or Common, central focus point for the community, with more than 80 percent of the respondents saying yes. 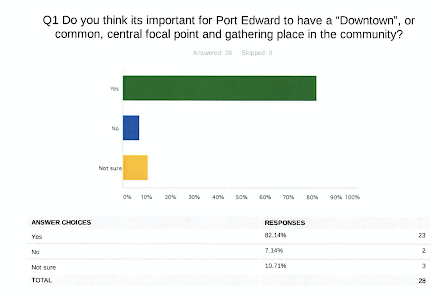 When it comes to what Port Edward residents would like to see in the way of commercial services, the prospect of such amenities as a Grocery Store, Take out or Dine In Restaurants, Delicatessen, Coffee shop or food trucks were favoured by 93 percentage, with seven percent having no opinion one way or the other.

Towards those options the largest response indicated a preference for a grocery store or convenience store, with Take Out food options also a popular theme. 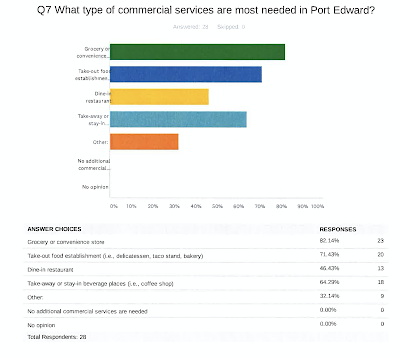 The concept of providing for a public gathering space such as a plaza or square, as well as development of a boardwalk, pier or walking trails found much approval as well, with over 92 percent agreeing that those elements would be worth exploring for the community.

Holding on to some of the character of the District was also part of the survey, with 92 percent of those participating stating that was a theme that should be noted by Council. 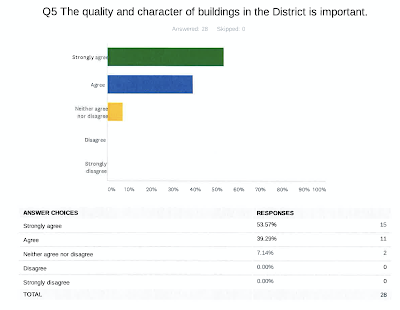 Adding to community options is also seen as key to attracting and retaining workers and residents for the District, with only one reply disagreeing with the idea of expanding amenities to attract residents.

Of the larger number who believe such measures are required, the two key themes were for more commercial options and an expansion of housing in the District. 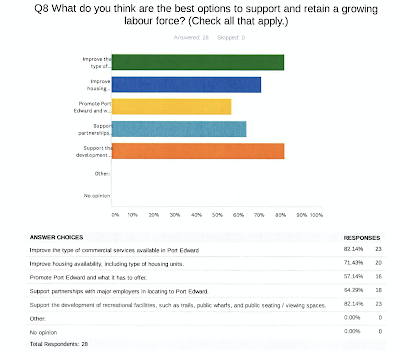 Other themes explored included what shape the downtown core could take and how the downtown should also connect to the waterfront, allowing the District to make for more use of that area of town.

How to create more features and attractions for tourism also gained some interesting feedback, with both the existing features of the District and some new ideas such as an expansion of hiking trails and beach access among the themes provided.

The District's survey also included a Vision Statement that notes the District would like to "Create a focal point for the community that provides a strong sense of place that draws the community together and becomes a significant asset that aids in the sustainable, long term economic development for the District"

In reply, 85 percent endorsed that sentiment, while fifteen percent weren't quite sure. 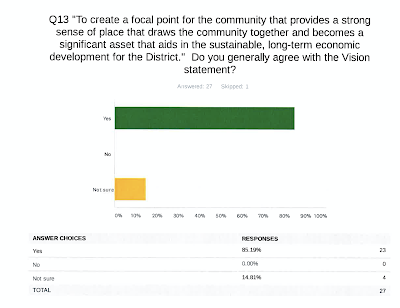 You can explore all of the data, including a wealth of information from the comments sections through the Agenda of the Port Edward Council session from Tuesday.

The themes and potential action on the results of the survey will make for more than a few conversations for the District in the months to come.

For more notes related to the District of Port Edward see our archive page here.