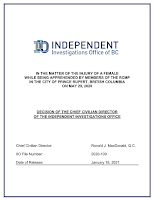 The provincial agency that conducts oversight on incidents involving policing in British Columbia has ruled on a May 2020 incident  overlooking the waterfront in Prince Rupert.

As part of the report released today the Independent Investigations Officer notes that there are no reasonable ground to believe that an officer may have committed  an offence under any enactment, adding that the matter will not be referred to Crown Counsel for consideration.

The incident in question dates back to late May of 2020, when a woman, reported as intoxicated,  was injured and required hospitalization as part of a struggle in an area along First Avenue West overlooking the Prince Rupert waterfront.

"On the evening of May 29, 2020, Prince Rupert RCMP members encountered a male and a female at a secluded lookout point. The male was arrested for public intoxication and the female Affected Person (‘AP’) was told she was under arrest for breach of court ordered conditions.

During the interaction, AP fell down a steep incline and was seriously injured. Because police officers had been involved in the incident, the Independent Investigations Office (‘IIO’) was notified and commenced an investigation.

The narrative that follows is based on evidence collected and analyzed during the investigation, including the following: • statements of AP, two paramedics and nine witness police officers; • police Computer-Aided Dispatch (‘CAD’) and Police Records Information Management Environment (‘PRIME’) records; • recordings of police radio transmissions; • video recording from a police vehicle; • scene photographs; and • medical evidence.

The IIO does not compel officers who are the subject of an investigation to submit their notes, reports and data. In this case, the Subject Officer (‘SO’) declined to provide any evidence to the IIO."

As part of the investigation witness testimony provided the details to the review which led to the IIO determination.

"What happened next was described by WO1 as an apparently assaultive act by AP against SO, and by AP herself as a drunken accident. Neither suggests that SO did anything to cause AP to fall, beyond telling her to get to her feet and making moves to handcuff her.

On a balance of probabilities, AP’s account seems more likely accurate: an accidental stumble towards SO, caused by intoxication and AP’s “stupid rubber sandals”, probably with her hands out in an attempt to fend off SO or to steady herself, and a disastrous step over the edge.

No fault attaches to either SO or WO1 for that. On the evidence, officers including SO responded quickly and appropriately after the accident, in locating AP and getting her medical attention."

You can review the full information release from the IIO here.

For more notes related to Emergency Service Providers in the Northwest see our archive page here.