With the prospect of over 1.5 million dollars in funding available for some COVID related remediation work, Prince Rupert City Council moved forward Monday evening on a quest  towards accessing some of the available cash.

The City's Corporate Administrator Ms. Rosa Miller provided for some limited background towards the grant opportunity which would put focus  towards restoration of the Hays Creek area.

"Hays Creek is the primary collector stream for the drainage of the north slope of Mount Hays, in the 1950's and 1960s the stream was collected into an artificial channel lined with stone walls as it passes through the Civic Centre and McClymont Park."

As Ms. Miller explained it the grant funding  of just over 1.5 million would come from ISIP COVID related program funding, which will cover 100 percent for approved projects.

In her review, she added that there would be no initial cost contribution would be required by the City. 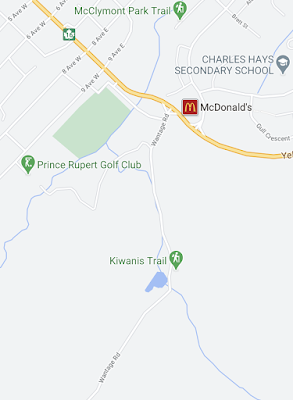 Councillor Adey, who was the only member of council to speak to the topic, expressed his support for the project,  had one question related to the work ahead, seeking some information as to the scope of the initiative.
"I'm in favour of doing this, I think that it's a beautiful area, a beautiful walking area for people in town. My question is around the work itself and I'm assuming that it would involve a number of heavy vehicles in there, or construction materials. Would restoring the natural environment I'm thinking of the natural environment,  I"m thinking of the grassy area near the bridge, would that all be restored as part of the plan that this grant would supply?"
In her reply, Ms. Miller observed she would have to seek out that information from the Director of Operations and get back to the Councillor as to what the project would provide for.
As Councillor Adey observed the eastern side of the channel has become a popular walking area for the community, one which has seen a number of proposals for further development, though those plans had stalled and for the most part suspended in recent years.
May 2020 -- The 'Cloud Berry Trail' to be the next big project for the Kaien Island Trail Enhancement society
May 2017 -- City of Prince Rupert to seek out grant opportunity for trail development along McClymont Park
May 2017 -- Council to hear proposal for cycling path to connect Civic Centre to Cow Bay/Rushbrook trail
There was no indication from Monday's session if the funding might also assist in revisting some of those trail building plans from the past.
Also of note from Monday, no one on Council asked if this was the only project that the City had considered towards the application for this round of funding; or if the city has a list of other projects that perhaps should have been given preference for such grant opportunities.
Council voted to move forward with the grant proposal plans.
The presentation and discussion can be reviewed from the City's Video Archive from the start of the Monday meeting.
For more notes related to Monday's Council session see our Council Timeline Feature here.
A wider overview of past Council Discussion topics can be explored here.
Posted by . at 12:16 PM