Premier John Horgan hosted a Friday morning media event, the session called to introduce the Provincial Government's vaccine delivery program, with the Premier calling on Doctor Bonnie Henry and Doctor Penny Ballem the executive lead of the immunization program to outlined what's ahead for British Columbians.

The program which features four stages will see those who are considered most at risk continue to receive the COVID-19 vaccine as has been the case through January.

For the remainder of the province's population, age has been identified as the single greatest risk and towards the deliver of upcoming supplies, the third phase will see the general population begin to get the opportunity for their COVID-19 shots.

Phase 3, starting in April, will expand to include people between the ages of 79 to 75 and work backwards in five-year increments to include those age 60 and over. Also included in this phase are people with certain underlying health conditions that make them clinically extremely vulnerable.
Phase 4 is anticipated to begin in July 2021 for the rest of the eligible population, starting with people aged 59 to 55 and working backwards in five-year age groups until everyone over the age of 18 who wants a COVID-19 vaccine receives it. 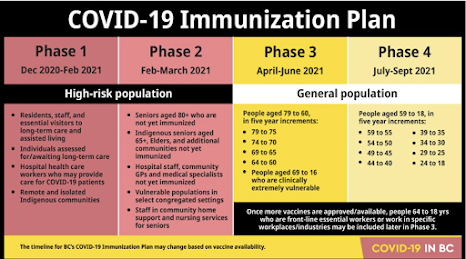 “We’re working closely with our regional health authorities, our colleagues at the BC Centre for Disease Control over these first several weeks of the plan. Moving ahead, we will reach out to other community, faith and business leaders throughout the province to ensure that, by working together, the deployment of these vaccines is done quickly and safely. Every immunization for COVID-19 is one step closer to a healthier future for us all, and that is why so much effort and thought has gone into this plan.” -- Doctor Penny Ballum on the BC vaccine program roll out
According to the province Approximately four million British Columbians are eligible to receive the COVID-19 immunization.
Starting in March 2021, pre-registration for the vaccine will begin to open online and by phone for the general public, starting with those aged 79 to 75.
During the Question and Answer portion of this mornings announcement, the Premier addressed a range of topics including the impact of ongoing travel restrictions on tourism and small businesses, as well as his desire to see inter province travel not take place at this time.
The question of the slow delivery of vaccines across Canada made for one inquiry on the morning, with the BC Government holding to their projections for delivery of their program, with Premier Horgan asking for patience from the public on the theme of vaccine delivery.
"Were confident that, well certainly by the end of February, that the backlog that we're experiencing,  that the Federal government is experiencing with Pfizer will be corrected. We're going to be getting those shipments that we anticipated for the week of February first, before the end  of March.
So we will have a lot of vaccine and a lot of anxious people looking forward to to getting those immunizations and Doctor Ballem and her team will  be at the ready to deliver it.
I say to British Columbians who are concerned about the news stories about disruptions in the supply coming to Canada and to other to jurisdictions to be patient, to be calm and to focus on following public health orders to keep themselves and their loved ones safe at this point.
And have confidence that public officials are doing everything they possible can to get vaccines into Canada, into British Columbia and into the arms of British Columbians"
More background on today's announcement as well as a detailed breakdown for each phase of the vaccine program can be found here.
For more notes related to the work of the Legislature see our archive page.
Our past notes on the Provincial response to COVID-19 can be reviewed here.
Posted by . at 4:16 PM