The long time home of the labour movement in Prince Rupert has changed hands, with UFAWU-Unifor confirming through their social media feed this month that the Fisherman's Hall on Fraser Street has been sold.

The building which had been on the market since the Spring of 2019  was reported as sold by the local office of UFAWU-Unifor on January 12th.

The building in the end continued to serve the community when it was needed the most, most recently as a temporary stop for the homeless, with Fishermen's Hall serving as a transitional homeless shelter, that while the now permaenent facility at Five Corners was prepared for use.

At that time it was the Hall that stepped in to fill an emergency need for the North Coast Transition Society, when no one else it seemed was interested in taking on the challenge that had been presented to the community.

That part of its evolution, as well as many other key moments in time, made for a thumbnail sketch of its storied history included in the  Facebook post. 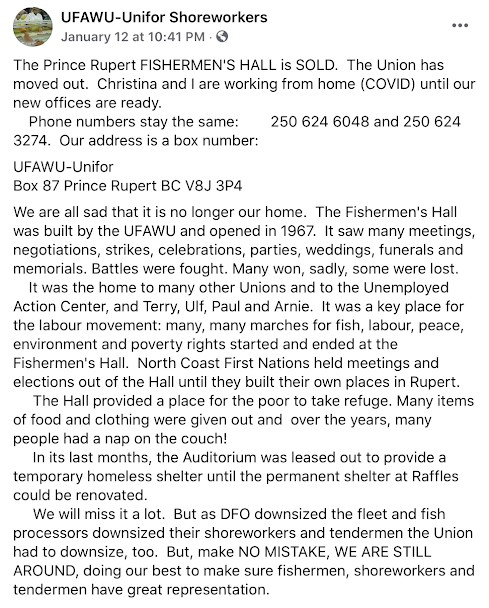 As was noted in their social media review, the Fishermen's Hall building was indeed the physical presence of the labour movement in the community, with a range of labour gatherings held in the Fraser Street Hall through the years, the Hall a location that served as many a starting point for local labour marches that wound through the city when the calls for action were issued.

The building has more recently also served as the focal point for the fight for affordable housing in the community, with the venue hosting a number of meetings to address eviction concerns in the city.

It will also hold many memories for the social events, receptions and Karate Club events that also made for its place in the fabric of the community.

The decline of the North Coast Fishery and growing costs of building maintenance eventually combined to make for a hard decision to bid farewell to their home, though the current operations for UFAWU-Unifor continue to be in place, with a new office location in the plans.

For now the local union officials are working from home and continue to advocate for those still involved in the North Coast fishing industry.

The new ownership has not been identified as of yet; nor is there any indication as to the fate for the long serving gathering spot on Fraser Street.

For more notes related to the Fishery see our archive page here.