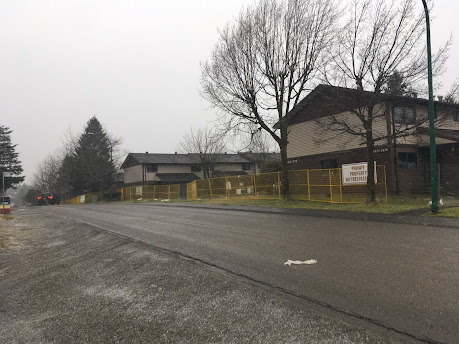 There appears to be some preliminary work underway along the eastern end of Kootenay Avenue with yellow fencing up around a few blocks of unoccupied townhomes and materials being carted out from the site.

The recent burst of activity in the McKay/Kootenay area does serve to remind local residents that there has yet to be any follow up from Prince Rupert council on the fate of a proposed redevelopment for the area.

A proposal for additional housing for the area that was introduced in the Spring of 2020 and since has seemingly been put on pause over the summer and into the fall and winter after a range of concerns from area residents.

The last update on the Kootenay plans from City Council coming from the lost Council session of October 26th, a public session which owing to technical difficulties did not get broadcast or added to the City's video archive.

The synopsis from the City noting that a Public Hearing was still planned, but no date yet confirmed towards it.

The Kootenay proposal when introduced back in May of 2020 included redevelopment of the stretch of Kootenay to include a 55 unit multi family residential development. 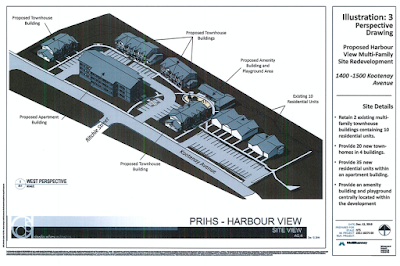 City Council appears to be accumulating a list of areas where Public Hearings or information sessions have been promised, but so far owing to COVID, have not yet been delivered on.

Something that would appear to be slowing down Council's ambitious goals towards increasing housing stock in the community.

The City also continues to move forward on housing themes without an actual planning department in place, having bid farewell to Zeno Krekic in 2020, with no indication yet if there are any plans to fill the vacant position, or to increase in-house civic staff for planning issues.

So far in 2021, while City Council has identified Housing as one of its key priorities for the future, the fate of the Kootenay plans have yet to be reintroduced in the public forum for further review, or even to offer an update on the status of what's ahead for the area.

To catch up on the past plans, some of the past chapters of the now long running housing story for the west side can be reviewed below:

A wider overview of past Council discussion themes can be explored here.