Taylor Bachrach, the NDP MP for Skeena-Bulkley Valley has announced that he has been appointed as his party's Transportation critic, a timely move for residents of the North Coast who have just seen air service suspended by Air Canada between Prince Rupert and Vancouver.

The MP advised of the additional duties in an interview with Terrace based radio station CFNR, seemingly breaking the news himself of his new tasks.
So far, the move by NDP leader Jagmeet Singh has not been posted to the NDP website, which still features Manitoba MP Niki Ashton as the NDP transportation critic.
That was one of a number of positions which Mr. Singh had taken away from her earlier this month, that following revelations that she had travelled to Greece over the Christmas holiday break.
In his comments to CFNR, Mr. Bachrach notes how assistance for airlines has been highlighted as a priority as part of the letter from the leader that outlines the focus for his duties.
The NDP highlighted that call last week following the Air Canada announcement, with Newfoundland's Jack Harris, the critic for Public Safety speaking of the impact the decision would have on Labrador.
The Skeena-Bulkely Valley MP, also recently took note of the Air Canada suspension of service in Prince Ruper,t observing last week of the need for Federal help for the aviation sector during the pandemic. 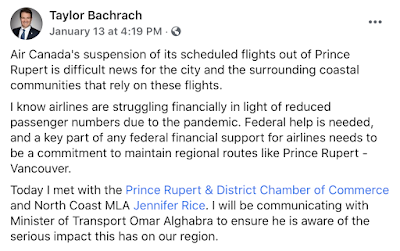 Mr. Bachrach has also been working to ensure that the Oil Tanker moratorium on the North Coast remains in place, that legislation is the subject of a Conservative private members motion to have it overturned.
The Skeena-Bulkley Valley MP will retain his other duties as critic for Infrastructure and Communities.
For more notes on the work the MP in Ottawa see our archive page here.
Posted by . at 9:10 AM