State of Local Emergency extended for residents of the Nass Valley, that as the supply of vaccine for Nisga'a Nation is delayed

As case count reports continue to register high and residents of the Nass Valley await the delivery of COVID Vaccine shipments, the Nisga'a Lisims Government has extended its seven day State of Local Emergency put in place on January 12th.

In an announcement released today the  NLG Executive extended the period of local measures, though no timeline as to how long the extension will remain in place was included in their statement.

Today's extension provided some further background towards what it means for local residents, with four key elements of the Emergency declaration explained, among them:

A prohibition on travel between Nisga'a Villages

Implementation of security monitoring in each Nisga'a Village

Prohibitions on gatherings and events of any sort

Officials also observed that residents of the villages need to remain at home in their own household bubbles and not visit other homes for any reason. 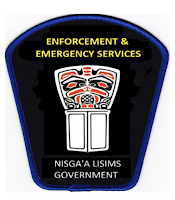 In addition the Nisga'a Lisims Government advises that if Nisga'a members know of individuals who are contravening Provincial or Nisga'a orders that they report the situation to the RCMP or the NLG's Compliance and Enforcement online reporting program.

That program can be accessed here.

Part of the reasoning behind the extension no doubt is related to news that the Nisga'a Valley Health Authority received this week that there will be a delay in the receipt of shipments for the Nisga'a Nation's allocation of the COVID vaccine.

As part of today's statement,  Nisga'a Health officials explained that they had expected their shipment to arrive on Tuesday, however it seemingly is now caught up in the sudden decline in shipments to British Columbia.

As of yet, the NVHA has not indicated when that shipment will be delivered, the Nisga'a Lisims Government's Executive Officers have reached out to the provincial and Federal Health ministers asking that the Nisga'a Nation be given priority status for BC bound shipments.

The full statement from the Nisga'a Lisims Government can be reviewed here.

Last Saturday we noted that the most recent update on Local Health COVID reports had recorded 29 new cases of COVID in the Nisga'a Nation for the week of January 3-9.

The next report is anticipated at some point this week.

So far,  none of the Northwest's elected representatives at either the provincial or Federal levels of government,  have offered up much in the way of comment or guidance when it comes to the slow roll out of vaccines for residents in their communities.

For more notes related to the provincial response on COVID see our archive page here.

We track the roll out of vaccines across the region here.