Prince Rupert City Councillors had a chance to get a glimpse of the next evolution for Prince Rupert's Trail network, as a pair of members from the Kaien Island Trail Enhancement and Recreation Society delivered an update at Monday's Council session.

Appearing as part of the Committee of the Whole process on Monday, Steve Milum and Frances Riley delivered the update on some of the recent work from the Kaien Trails Society, reviewing some of the past projects that the group has taken on and offering a preview of their next initiatives.

Among the highlights on the night was Ms. Riley's outline for the development a trail to be known as the Cloud Berry Trail, which will travel along Highway 16 leading from the Civic Centre towards the Butze Trail area, Tall Trees Trail and Oliver Lake.

That project would be a multi use trail, running along the mountain side of the highway and would offer a strong opportunity towards accessing funding towards development.

The timeline towards development of that new trail would see the group submitting a permit application to the Province in the Spring, with preliminary concept and cost estimate set for the summer of this year.

They then will launch their corporate engagement in the fall with grant applications to be put forward over towards the winter of 2021. 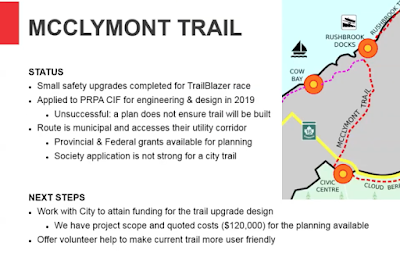 Among their other notes was an update on the status of the plans for the McClymont Trail, a project that they had brought to CityCouncil back in January of 2019.

As they explained it on Monday, Progress on that project has been put to a shelf for now, with the Kaien Trails group noting that as it is a City of Prince Rupert utility corridor, they have had difficulties accessing funding opportunities towards that proposed project.

Though they did note for the council members that there are federal and provincial grants available to the city towards further development of that trail if the city wishes to follow up on them.

Ms. Riley and Mr. Milum also outlined some notes on another trail that they have some enthusiasm for.

That of the proposal for the Seal Cove area known as the Rail Trail,  noting how it will need further consultation with the City and other regional stakeholders before they can look to move forward into development of it as part of the Master plan trail. 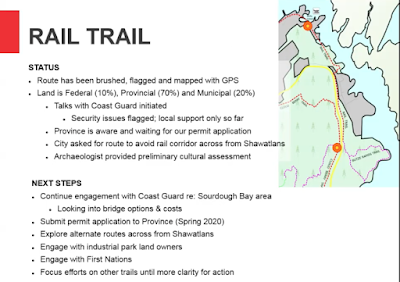 Mr. Milum also spoke to the theme of funding, outlining the range of grant opportunities that are available for the community to access. 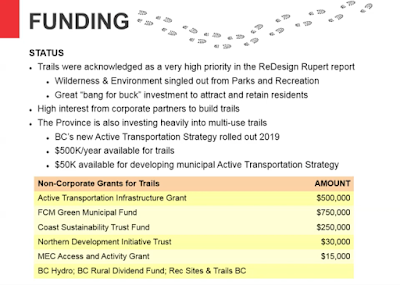 He also advocated for the City to develop a Transportation Strategy, noting that if the City does so, it would be easier to access a wider selection of grant funding.

He highlighted some of the benefits of such a plan and how it would work nicely as part of the City's plans to update their Official Community Plan in 2020.

Mr. Milum also made note of the interest in the Active Transportation Strategy found in other Northwest communities and how Prince Rupert risked losing out on the large pool of money available if the city doesn't develop one for this community.

He also outlined how if the City has such a plan in place, it would open doors for Kaien Trails to then gain access to a range of funding opportunities for further development of the trail network in the region. 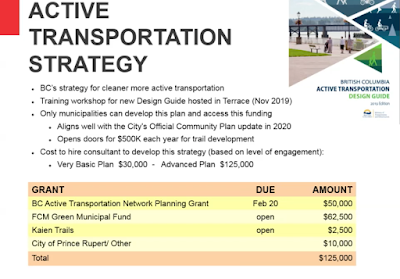 When it came for comments and questions, Council members had much praise for the work of the Society as well as few inquires on some of their themes.

Councillor Adey commented how the Kaien Trails proposals were part of the recent discussions on Redesign Rupert process and how he found much enthusiasm for their plans.

He also made note of one item that will need to be addressed and that was on the theme of maintenance of the trails and what provisions might be in place towards those elements.

Towards that concern, the Kaien Trails representatives offered up a thumbnail guide as to how they would address long term maintenance, noting how the Cloud Berry trail is on provincial land and how the province would most likely take on the maintenance concerns.

As for other trail initiatives, it would be a mixed approach relying on volunteers.

Coucillor Adey also made note of the urgency related to the February deadline and how he supported whatever Council needs to do to move it forward.

Councillor Mirau echoed a number of Mr. Adey's themes and made note of the timing of development for an Active Transportation Plan and how it would work with the city's review of the Official Community Plan.

"An Active Transportation plan would be really valuable information, as you guys know, we're moving forward with a new Official Community Plan. And that will be valuable feeder information in that process as well, so I think it's all consistent, it's all linked, so I think your timing is fantastic."

Councillor Cunningham inquired as to the volunteer numbers that the Society has at the moment, he also expressed his admiration for their work and spoke to the success of the Rushbrook Trail.

Councillor Skelton-Morven also offered his congratulations on their work and their initiatives ahead.

You can review the full presentation to Council from the City's Video Archive starting at the very beginning of Monday evening's proceedings.

For more notes on Kaien Trails Enhancement Society, including a link to their master Trail plan for the region, see our archive page here.

Email ThisBlogThis!Share to TwitterShare to FacebookShare to Pinterest
Labels: Trail plans for Prince Rupert for 2020 and beyond