British Columbia government commits to funding for BC Bus North

For British Columbians you will still be able to get from here to there in some fashion in northern British Columbia, with the BC Government confirming it's plan to continue funding the BC Bus North Service through to March 31, 2021.

The service which took over some of the routes previously served by Greyhound operates limited service between Prince Rupert and Prince George on weekly basis, with travel taking place from Thursday through Saturdays.

The BC Bus North was introduced to residents of the Northwest in May of 2018, described at the time as a temporary measure while the province explored other transportation options in the Northern region.

The service departs and arrives from in front of the Highliner Inn on First Avenue West in  Prince Rupert. 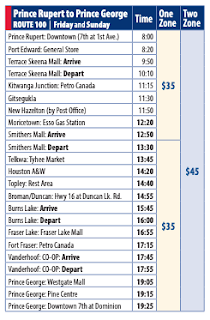 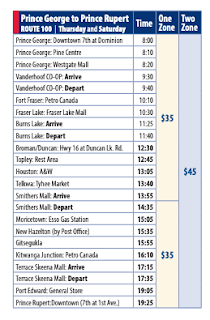 The funding for the BC Bus North service will be provided through the Government of Canada and the Province of British Columbia. With each level of government contributing roughly 1 million dollars each towards the service over the next 14 months.

“Our government is delighted to partner with British Columbia to address gaps in inter-city bus services. We know how important it is for Indigenous communities and Canadians living in rural areas to have access to affordable transportation services, whether to visit family members or to attend a medical appointment.” -- Marc Garneau, federal Minister of Transport.

“When Greyhound stopped its service in the North, we didn’t want to leave people without a reliable and affordable transportation option. That’s why we started BC Bus North and why we’re now partnering with the federal government to continue to fund B.C.’s northern inter-city bus service through March 2021.” -- Claire Trevena, B.C. Minister of Transportation and Infrastructure.

As part of the continued funding however will come a review of fares for the service, with the partners looking to align the fares with the distance covered by the routes.

In their statement today they advised that BC Bus North fares will move toward the industry standard of aligning fares with distance. The outcome of that  is that some fares will increase, though new routes have been created with lower fares.

Fare updates will be made available on the BC Bus North website on Friday, Jan. 31, 2020.

You can learn more about today's announcement here.

For a look at the various routes and more information related to the BC Bus North service see their website.

For more items of note on Transportation in the Northwest see our archive page here.

Email ThisBlogThis!Share to TwitterShare to FacebookShare to Pinterest
Labels: Funding secured for BC Bus North to march 2021