Will the '64 Rainmakers be Fantasy Hoops champs by March 3rd? 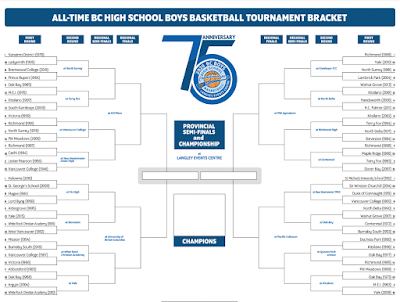 An intriguing project to celebrate the Diamond Jubilee for British Columbia's March Madness of High School basketball was launched on Wednesday.

That as a number of veteran coaches and administrators who have been working on the project for much of the last six months, released the list of teams they believe merited inclusion in a 64 team bracket of the all time teams in BC High School Basketball history.

The project which was introduced through Howard Tsumura's Varsity Letters blog, will continue through until March 3rd with the brackets moving forward to determine which of the 64 that have been selected will claim the title as Provincial Champions.

The wrap up to the fantasy bracket will come just as this years crop of rising stars prepare to hit the court in Langley, as the take part in the 75th edition of the BC High School Boys Basketball Tournament. 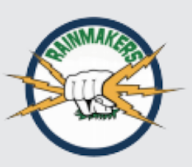 Prince Rupert hoops fans will want to take note of the fantasy listings, as the North Coast is represented in top style among the 64 competitors.

That through a team that itself is steeped in Prince Rupert basketball and community history. With the legendary 1964 Rainmakers team finding themselves listed as a number 9 seed in the first round, with the 1965 Oak Bay club to be their first round fantasy competitor.

The 64 Rainmaker team bubbles just under the favourites among the top seeds for the fantasy tourney some of them considered to be the most renowned of High School teams through the decades.

Tourney organizers, having reviewed the record books and calling upon some long lasting memories have determined the seeding for the fantasy tourney:

The first results from first round results which launch the 35 day road to the finals will be released on Friday.

You can travel along with the 1964 Rainmakers in their quest for one more championship run and learn more about this fantasy tournament through the Varsity Letters blog.

To return to the most recent blog posting of the day, click here.
Posted by . at 9:38 AM

Email ThisBlogThis!Share to TwitterShare to FacebookShare to Pinterest
Labels: 64 Rainmakers among 64 of all time best High School teams in fantasy Championship run