Those travelling between Islands on Haida Gwaii have reason to celebrate today, as Route 26 sees an increase to scheduled service as of today, with more frequent passages between Alliford Bay and Skidegate.

The additional sailings which had been promised for last fall, had been deferred by BC Ferries owing to staffing issues in ramping up their plan to add to the service as mandated by the provincial government. 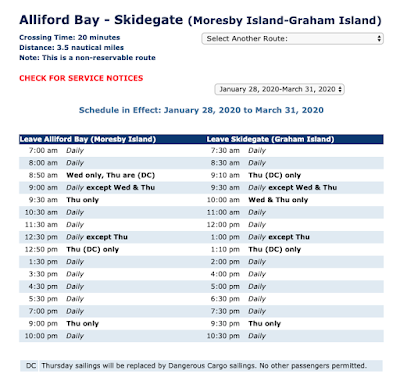 The desire for a return to previous levels for sailing frequency which had been reduced in 2014, was one of the major issues of concern for the various community governments on Haida Gwaii.

North Coast MLA Jennifer Rice made note of the increased service levels that began today through her social media feed.

In a statement from earlier this month, the MLA observed that the province in currently working towards developing a vision for ferry services and to ask coastal communities what their service should look like and how it can evolve to serve residents better.

The roll out of that engagement process got underway in October, when Transportation Minister Claire Trevena made a whirlwind trip to a number of Coastal communities including a stop at Haida Gwaii, though curiously, the Minister chose to skip a visit to Prince Rupert.

That online engagement will be delivered through the provincial government's online portals.

So far however there is no indication from the Transportation ministry website as to when that online consultation will get underway.


To return to the most recent blog posting of the day, click here.
Posted by . at 1:53 PM

Email ThisBlogThis!Share to TwitterShare to FacebookShare to Pinterest
Labels: BC Ferries increases sailings for Kwuna on Haida Gwaii