We still have a few months to go before we see an Alaska Ferry back in Port, but if all goes well and a Draft Schedule proposed today is accepted, Prince Rupert will see a return to limited Alaska Marihe Highway service to and from Ketchikan starting in May.

The months of January to April still show no Sailings through the Fairview terminal, which last saw a vessel from the AMHS in port in November prior to the suspension of the service.

The proposed Draft schedule however, shows four sailings for the Alaska Marine Highway vessel Matanuska in May, with Prince Rupert set to alternate with Bellingham, Washington as southern ports for the summer schedule through to September.

Prince Rupert would see service twice per week, every other week. 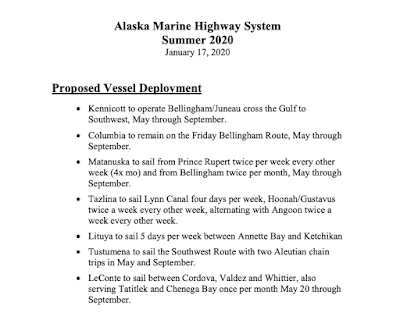 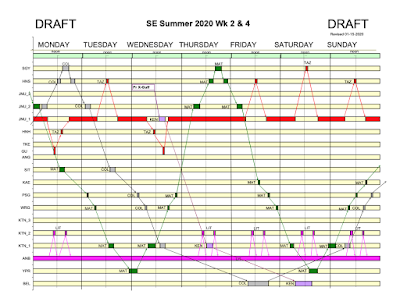 The schedule won't be firm until after communities and interested participants have had an opportunity to comment on the Draft proposal with that engagement period to carry on through to February 3rd.

The draft schedule is based on expected funding levels for fiscal year 2021. The operating plan is designed to meet community service needs while staying within available funding levels and maintaining regulatory and safety standards for the vessels.

All the background information related to the Draft schedule can be found here.

Once the schedule is approved passengers can access the AMHS booking program here.

The Draft schedule solution would still appear to be a temporary fix to the larger issue of the fate of the Alaska Marine Highway Service which is now the subject of much discussion as to how to operate a transportation system within the budget constraints in place.

As we noted last week, a document titled the Alaska Marine Highway Reshaping Report was released, providing a range of options for review, including elimination of the Prince Rupert route.

On Monday, we outlined the next step of that review, as Governor Mike Dunleavy announced the formation of a Work Group for the project.

Not mentioned in the report, but still an item of discussion for Alaska and Canadian officials is the status of security at the Prince Rupert terminal, with the call from Alaska for a permanent armed Canadian police resource on site, one that still has to be resolved.

It was that lack of an armed presence that led to the original suspension of the service in September 2019.

For more notes on the Alaska Service see our archive page here.

To return to the most recent blog posting of the day, click here.
Posted by . at 3:55 PM

Email ThisBlogThis!Share to TwitterShare to FacebookShare to Pinterest
Labels: Summer sailings could be back on reduced schedule for AMHS in Prince Rupert