The Alaska Marine Highway will end its service to Prince Rupert effective October 1st, the shocking declaration of the end of the long lasting marine connection that began in the 1960's came today through an information release from the State of Alaska.

The reason given by the Marine Highway System that led to the decision to end the service, is the inability to secure security staff at the Prince Rupert terminal.

A request that the US Customs and Border Protection Service had made last spring.

We outlined some of the background to that request in May, with the Alaskans having granted an exemption from the CBP request until the end of the summer travel season.

However, despite having worked with both the City of Prince Rupert and the RCMP on the issue, the lack of an agreement made for the key factor that led to today's announcement.

All avenues for local law enforcement were pursued, but AMHS was not able to secure the staff necessary to fulfill this requirement. The new requirement specifies a Canadian law enforcement presence with the ability to make arrests in Canada, which is not a duty that AMHS staff are able to perform.

Over the summer, AMHS worked with the City of Prince Rupert and the Royal Canadian Mounted Police to meet this requirement, but neither of these entities have staff available to perform the duties necessary to comply with the new requirement. 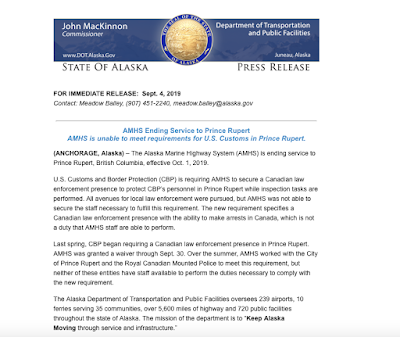 You can review the full information release here.

The AMHS had only just resumed service to Prince Rupert after the late July labour dispute that left the vessels tied up in Alaska for over a week.

Today's announcement does not provide for any advice for travellers as to how they will access AMHS services after October 1st and what other plans that the service may have for the future.

So far the City of Prince Rupert has not issued any statement of its own to address the withdrawal of the marine service from the community. We will update the story as more information  becomes available.

To return to the most recent blog posting of the day, click here.
Posted by . at 4:31 PM