You may not know it, but in recent days Prince Rupert has made its debut on the world stage as an oil port, with a shipment of Bitumen having recently transited through the Port of Prince Rupert on its way to Asia.

However, in this new future for the controversial resource product, there will be no oil tankers pulling up to an oil terminal; but instead, a container of what is being called True Crude passing through the Fairview Terminal and on to further transit as part of one of the scheduled container ship port calls at the Prince Rupert facility.

The new era for resource shipments comes from a company called Melius which has apparently become the first of the growing number of companies working on the concept to make it a reality, having sent the equivalent of 130 barrels of bitumen to China in a test shipment through Fairview. 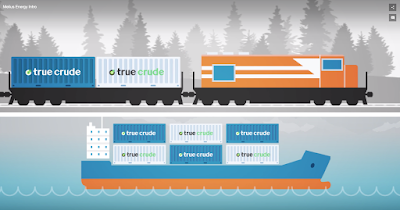 The True Crude concept removes the liquid diluent from the process, creating what is known now as BitCrude a semi-solid product that is stored in custom designed containers, shipped by rail to port facilities for further shipment to global markets.

As Melius sees the future, existing rail lines could soon be moving large volumes of the product by way of 100 unit trains per day through the Port of Prince Rupert.

Once at the destination across the Pacific, the BitCrude would then be returned to a liquid state and refined for further use, with developers keeping an eye on China's growing thirst for energy products.


Calgary based Melius announced the successful first shipment out of Prince Rupert with an information release yesterday, noting how the the bitumen is designated as a non-dangerous good and non-flammable for transportation purposes, floats in both fresh and saltwater in custom designed shipping containers and is non-toxic to marine life.

According to the Melius notes, the product meets or exceeds all regulatory requirements of bill C48, ensuring safe and efficient export out of the Port of Prince Rupert.

“Now that we have tested the intermodal transportation method for exporting bitumen, Melius Energy is focused on scaling the BitCrude™ transportation solution. Establishing a transportation solution for Canadian energy that delivers tremendous value for local producers while satisfying the demand for our energy internationally is our priority”. -- Melius President, Nicole Zhang. 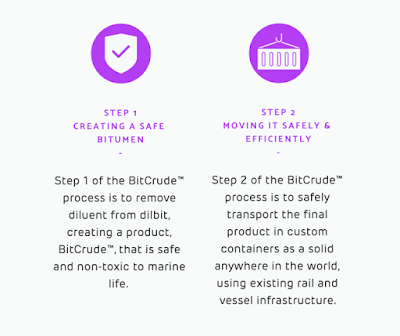 With the successful test now complete, the next step is to complete a demonstration diluent recovering plant in Edmonton, as well as to develop partnerships in Asia towards further expansion of their plans.

Towards that, Melius continues to establish relationships with refineries in Asia and is working to provide a long-term, stable supply of bitumen to these customers. The refineries that Melius is currently working with plan to refine Alberta bitumen into products such as asphalt and low-sulphur diesel.

You can explore more on TrueCrude  from the Melius energy website, included as part of their notes on the new focus for energy development and shipment, is a video presentation to show how the entire transportation system works in sync to send the land locked Alberta product to the world.

Melius is not the first company to come up with the concept of turning bitumen into a solid product for shipment, an indication of the innovative ways that are being explored to solve Canada's inability to get its resources to world markets.

Late last year we made note of a product called the CanaPux, a product being tested by CN Rail which also would remove the diluent and turn bitumen into hockey puck sized blocks for storage into hopper cars for further shipment.

Regardless of the which format may eventually come to dominate the marketplace, either way it would seem that the the Port of Prince Rupert will soon be adding the oil industry to its growing list of partners shipping out of the Northwest Gateway.

For more items of note on shipments out of Fairview Terminal see our archive page here, a look at CN Rail related notes is available here.

For further background on the Port of Prince Rupert see our archive page here.
Posted by . at 8:48 AM

Email ThisBlogThis!Share to TwitterShare to FacebookShare to Pinterest
Labels: Alberta company sends a test container of solidified bitumen to Asia