A project at Conrad School which was first announced in the Spring is moving towards the grand reveal, with students at the east side elementary school set to put the finishing touches towards a new mural for the school.

The project which has been one of partnership with Transition Prince Rupert is under the watchful eye of local artist and SD 52 teacher Kelli Clifton.

She was busy through the summer in the preparation work of the mural and with school now back in session, the students of Conrad are ready to help bring the work together.

We offered up a preview of the work when it was first announced at the end of May. 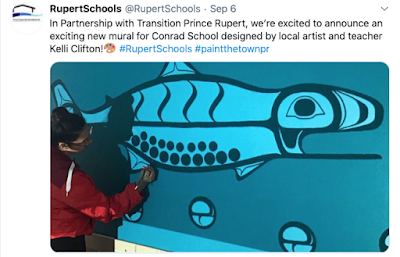 It's anticipated that the mural will be placed on the outside walls of the school later this fall, for now the School District invites us all to chart its progress from this update page as well as through the SD52 twitter feed.

For more items of interest related to SD52 see our archive page here.
Posted by . at 10:06 AM