Whatever plan that Prince Rupert Mayor Lee Brain presented to the State of Alaska, came up a bit short it seems.

With reports out of the state today suggesting that the Alaska decision to end ferry service between Prince Rupert and Ketchikan will continue on, with the final sailing set for the end of this month.

The Ketchikan Daily News has reported that Mayor Brain met with Alaska Transportation Commissioner John MacKinnon on Tuesday, but that they had been unable to reach an agreement over the firearms regulation that is at the heart of the decision to end the ferry service between Prince Rupert and Ketchikan.

And while the shut down of service remains on for September 30th, there may be a glimmer of hope over the longer term, with the Alaska Transportation Department observing for the Ketchikan newspaper that efforts to reach an agreement are considered as ongoing.

The decision to end the run between Prince Rupert and Ketchikan has been the focus of much discussion for officials in the Alaska city, who continue to look for ways to get the message across to their State government of the importance of the connection remaining in place.

So far, Mayor Brain has not provided for his own update on the state of those discussions with the Alaskans; or to outline what the plan that was presented to them would have provided for.

Last week, through his Facebook page, he had indicated that such an update would be delivered following his discussions in Alaska.

Currently Mr. Brain is attending the second of three days of the Southeast Conference meetings taking place in Sitka.

Any work towards resuming the service however may be something that most likely won't be resolved until 2020, if the issue is resolved at all.

If the past few seasons are an indication, the AMHS would have once again been suspending its Prince Rupert sailings in December,  Last year the Fairview Terminal was shuttered for January and the majority of February as the AMHS responded to reduced funding from the Alaska Government.

As it stands today, there are four sailings remaining for the service which has linked Alaska and British Columbia since the 1960's 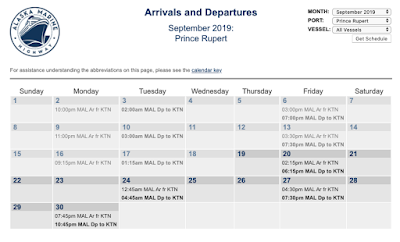 For more background on the issues that have taken us to the September 30th end of service see our archive page.