Snapshots from the past, bring Clouds to Prime Minister's Sunny Ways vision


Today has been more akin to a Redemption tour, as opposed to a re-election campaign for Prime Minister Justin Trudeau, that as the Liberal party look to try to contain the damage caused by the release of some shocking photos of a younger Trudeau prior to his political life.

The blockbuster moment for the campaign arrived late last night with the first of what would become three images (so far) of Mr. Trudeau making use of black or brown face make-up on what is now a variety of social events.

The first image was not released by Canadian media, but rather by the American news journal TIME magazine, with the Canadian outlets then coming up with a few other instances to add to the narrative of a Prime Minister having to face his past mis-steps.

The photo and article from TIME that started the rising tide of bad visuals, was taken from a 2001 fundraiser for a West Vancouver School where the Prime Minister was a teacher, which some suggest is an indication of some rather poor judgment by the then 29 year old educator. 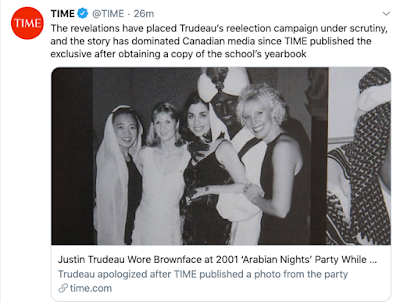 The first short apology came last evening on a campaign plane, while a second one came as part of an appearance in Winnipeg today.


Those comments were part of  a wider media availability from the Manitoba city this morning, with the Prime Minister speaking to the issue and answering questions for over an hour.

For the most part today, few are suggesting that the Prime Minister is a racist, but rather exhibited poor judgment in the past, along with some hypocrisy on some of his social justice themes from four years of Liberal governance.

Others have noted that he no doubt was aware of his past and should have revealed the troubling photos of those days long before the final year of his first four year term, while campaigning for a second one.

The opposition leaders have addressed the issue with a variety of statements of concern, though most observers have credited NDP leader Jagmeet Singh as having struck just the right tone towards the issue.

As for the campaign still underway, in his media availability of Wednesday in Winnipeg, the Prime Minister was asked by Global TV's David Akin if he did not think that perhaps he should step aside to work through his personal issues and let someone else lead the party through the election.

A comment which the Prime Minister navigated around with mentions of consultations with Liberal candidates, fellow Liberals and leaders of racialized communites across the nation, seemingly planning to stay the course as Liberal leader.

Such has been the magnitude of the disclosure of the photos of the past, that the Canadian election has suddenly become an item of interest for the International media, though none of them see to be focused much on tax cuts for the middle class and other sundry notes of the campaign. 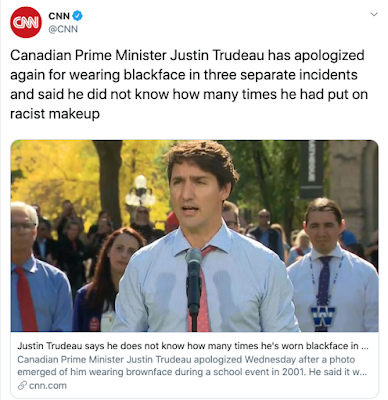 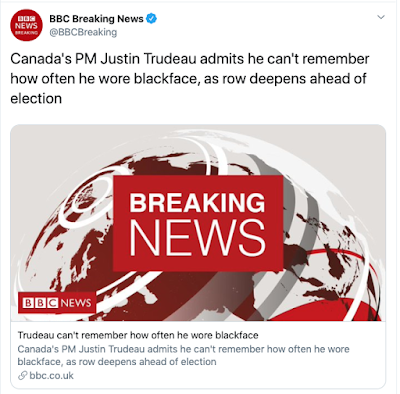 With the Liberals in Skeena-Bulkley Valley so far off the pace of the front runners that they are in a battle with the Greens for Third place at the moment, any political impact of his photos will most likely be delivered   in other areas of the country,

How the Prime Minister's  apologies are received and providing no further photos appear, the reaction to the controversy could deliver fence sitting Liberals to other parties, something that probably is of more political concern in the larger population areas where the races are tighter.

Considering the electoral baggage that the Prime Minister had already brought with him into the campaign related to the SNC-Lavalin file and other political troubles, he's quite fortunate that to this point the leadership of the other parties has yet to truly engage the voters, leading to some very tight polling results in these first two weeks of the campaign.

However, those results may see some significant shifts in the weeks ahead, should the mea culpas and seemingly sincere comments of atonement fail to resonate with the public.

What's particularly bad for the Liberals is that for the early stage of this election campaign, they have as a strategy tried to paint some of the other parties as out of touch with Canadian values; all while they were quite quick to highlight the tarnish of a number of candidates across the country.

As always in politics, the stench of hypocrisy is perhaps the most dangerous element that a party can be caught up in and have to defend itself about.

What Wednesday's photographic revelations have done however has been to introduce the topic of how society views the issue of race and how our past deeds reflect less aware times.

Though what year stands as that demarcation line of awareness remains a fuzzy one for many.

And in the case of the Prime Minister some of the photos were clearly after a timeline where most considered the use of blackface or brownface in the one instance, as something that was surely not acceptable for party accessories or any other situation for that matter.

For most of us today, it should be the unanimous view that such role play complete with black or brown face is out of step with the Canada we believe exists, or as the Liberals might put it  ...  because it's 2019.

However, few of those who may have that particular skeleton in their personal closets are seeking to lead a nation; particularly on a policy theme of being the only leader who believes he understands Canadians best.

In the flurry of articles that came out of last night's storyline two stood out for their clarity on the issue at hand both for Society and for the Liberals.

John Ibbitson and Paul Wells seemed to both capture the immediate gravitas of the moment and the fall out that could come from the revelations.

The offence was not just Trudeau's makeup, but also the silence

The photos of course have dominated the election cycle since last night, with other campaign themes clearly best kept for another day, deprived of any hope for exposure as the news cycle covers the larger story.

You can review more of the coverage from last evening from our D'Arcy McGee Portal where we catalogue a wide overview of material from the national campaign trail.

The larger archive of the campaign so far is available here.
Posted by . at 3:51 PM