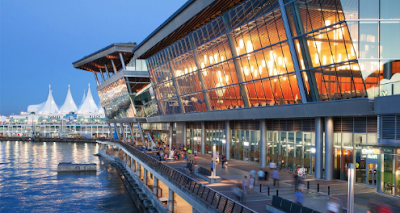 While the delegates to this years UBCM convention explored plans earlier in the day to eliminate any future receptions from foreign governments, it was a case of last call for all on Wednesday night!

With a fairly strong number of UBCM delegates stopping into a hospitality lounge to take in the festivities put on through a controversial event hosted by the Chinese government.

We first noted earlier this summer that the issue of the Chinese hosted event was destined for controversy, with Port Coquitlam Mayor Brad West leading the push to bring an end to the sponsorship of events from foreign governments.

This year's event was marked by a reminder  from Mr. West prior to the event, that the hosts' home government is currently holding two Canadian citizens, Michael Kovrig and Michael Spavor in custody with little in the way of access to Canadian officials or a clear definition of the charges they face.

The incarceration of the two high profile Canadians, has been considered by many as an apparent move by the Chinese government to pressure the Canadian government over the detention of Huawei Communications executive Meng Wanzhou.

That detention came as part of a request by the US Justice department which is investigating Huawei, with the Canadian government acting on the existing legal protocols in place for such issues.

The Chinese government have also added onto to the legal woes for some of the other Canadians currently in custody in the fallout over Ms. Wanzhou's detention.

The jailing of the Canadians and concerns over China's human rights record made for the guiding theme of calls for a boycott of the Chinese UBCM event.

A call for solidarity that was heeded by many, but ignored by a significant number of municipal politicians who showed no misgivings when it came to attending the function.

The nature of the event and the protest of it, guaranteed some extensive coverage of the Chinese hosted party, with more than a few of the municipal leaders that did attend making comments about the need for communication and to show respect for a trading partner.

None it seems, had cause to remember, or give much thought for that matter, towards the fate of either Mr. Kovrig or Mr. Spavor who have been locked in Chinese jail cells for close to nine months now.

The reports of those in attendance covered a range of small and large centres, among them Terrace which was listed as one Northwest community which reportedly took in the event.

To this point there is no indication one way or the other, as to whether any of members of Prince Rupert's delegation took up the Chinese government on their hospitality on Wednesday evening.

Perhaps the hosts on the evening will publish a thank you letter, providing an update on the roll call of those that took advantage of the beverages, food and evening of socializing.


Once the push to eliminate the foreign hosted events get final approval, one wonders how this years UBCM attendees may fill that void in the future.

There is an option we think, for those who attended Wednesday's festival of good cheer and schmooze to really explore the full extent of the Chinese government's hospitality.

We're pretty sure that Mr. Kovrig and Mr. Spavor would be more than willing to swap places and give up their current accommodations; all of course in order to make way for British Columbia's more social members of the political class to get some more first hand experiences!

You can find more notes from the convention floor through the UBCM twitter feed.

For more items of note related to this years UBCM gathering see our archive page here.
Posted by . at 10:57 AM