With a day and a bit to unpack two weeks worth of laundry and to reflect on a week of convention in Vancouver; Mayor Lee Brain has taken to his Facebook page to offer up some thumbnail notes on the work of Prince Rupert City Council at UBCM 2019.

Yesterday, the Mayor provided for a check list of sorts towards some of the themes for discussion that he, Council and staff members took part in during the five days of UBCM.

Of those noted as attending  convention week with the Mayor, were all six City Councillors, as well as three of the top level of staff members at Prince Rupert City Hill.

Among some of the conversation topics the Mayor highlighted from the UBCM gathering were:

The mayor noted of discussions with BC Housing officials towards additional units for the city's homeless and for plans to expand the downtown emergency centre in a new location. He also observed on consersations towards more affordable, family and Seniors Housing.

Among his themes, Mr. Brain outlined how the City's delegation spoke towards advocacy for Opthalmology and Dialysis services for Prince Rupert as well as to seek out progress towards a Detox centre for the community

Watson Island apparently was of some focus towards the theme of economic progress, as well as the work of Redesign Rupert. Also up for discussion regional logistics and transportation initiatives, as well as critical infrastructure requirements

The Mayor also made note of the city's efforts towards the Port Property Tax Act Review, Ridley Island Tax Sharing Agreement, First Nations partnerships and the work to move forward with the Resource Benefits Alliance program.

While the check list is a strong one of issues raised, there so far is no indication as to how much progress the City has made towards some of those concerns.

Or, if any relief for the many themes raised is on the way to this point.

His Sunday Facebook notes also indicate that a Public Meeting for the community will be held on December 12th at the Lester Centre.

At the information session, the mayor indicates that he will be communicating more with residents about the work of the ReDesign Rupert plan. 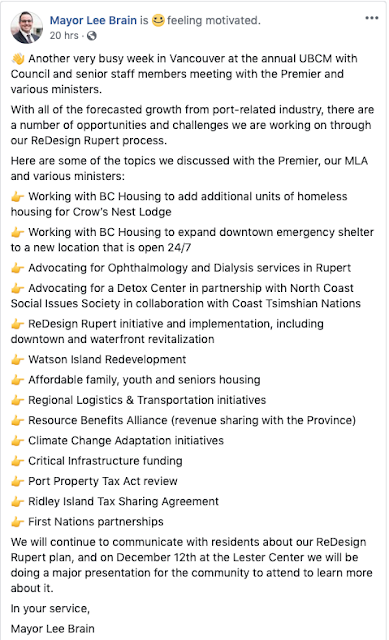 A little sooner on the calendar, October 7th marks first public opportunity for the Mayor to recount on his two weeks of travel to Alaska and then Vancouver; as well as for City Council members to share their thoughts, if so inclined,  on their work at the  UBCM of last week.

That is when Prince Rupert Council shifts from its more relaxed summer schedule and returns to their schedule to twice a month meetings.

For more items of interest from the recent UBCM convention, see our archive page here.

Email ThisBlogThis!Share to TwitterShare to FacebookShare to Pinterest
Labels: Prince Rupert at UBCM 2019