For Now ... or Forever? Only time will tell! MV Malaspina set to sail off into the night, as AMHS service to Prince Rupert comes to an end.

The last load of Alaska bound passengers to pass through Prince Rupert's Fairview Terminal will be boarding the MV Malsapina this evening, with a 10:45 PM departure set to be the last for the foreseeable future, if not forever.

That as the State of Alaska follows through on its announcement of earlier this month that will bring an end to  AMHS service to Prince Rupert after close to six decades.

The Alaskans have chosen to take Prince Rupert off the destination map over unresolved security concerns which were raised back in April; with the most recent attempts to find a solution from earlier this month still coming up short of American expectations it would appear.

As we observed earlier this month,  Prince Rupert Mayor Lee Brain had travelled to Juneau for discussions with Alaska State officials and those from the Alaska Marine Highway System and  from his Facebook post of the time, he outlined how he remains hopeful that the current concerns over security will be addressed at some point in the future.

When it comes to the plan that Mr. Brain presented to the Alaskans, he has not as of yet, outlined any of the details that make for his proposed solutions.

And since the mid September meetings in Juneau and Sitka there has not been any kind of timeline for further discussions with the Alaskans, as well as for any Federal engagement on the issue out of Ottawa.

In addition to the interest from the Prince Rupert side of the A/B line to keep the connection alive, residents of Southeast Alaskan communities have been working on their own politicians to seek to reverse the decision to end the service, noting that it will remove their only easily accessible connection with the North American road system. 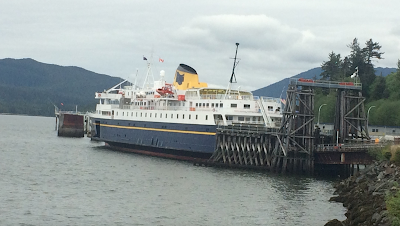 For now, the last line from the MV Malaspina will be let go at tonight's 10:45 departure.

With any time frame for a return visit from the Alaska Marine Highway fleet off in some very uncertain future time ... if at all.

For more notes on the end of the AMHS service to Prince Rupert see our archive page here.