The dawn of a new season of hockey for the Senior CIHL circuit is just a little over a week away, with the Prince Rupert Rampage working off some of the summer rust in anticipation of their opening showdown next Saturday night with the Smithers Steelheads.

The Smithers squad is making its return to CIHL after a hiatus of a few years, joined this year by Hazelton another team which has returned to the fold,  in the case of the Bulldogs after a lengthy absence.

Now with seven teams, six of them will be looking to chart a course to Quesenel for the seasons end, with the Kangaroos selected to host this years Coy Cup Championship set for March 24 to 28 of 2020. 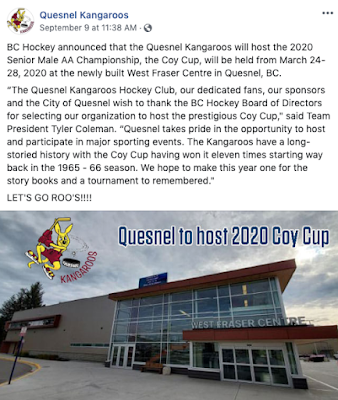 There is however a lot of hockey ahead before we reach that point and for Prince Rupert fans the season will have an extra bit of zing this year, as Rogers Hometown Hockey comes to the city in December.

Something that the City of Prince Rupert was quick to celebrate shortly after the Rogers schedule was released on Tuesday morning.

As we noted earlier this week, the popular Sunday night showcase of hockey will be setting up at the Jim Ciccone Civic Centre On Sunday, December 8th. With hosts Ron MacLean and Tara Slone exploring the hockey scene on the North Coast while those taking in the festival of hockey watch the Sabres and Oilers on the Big Screen. 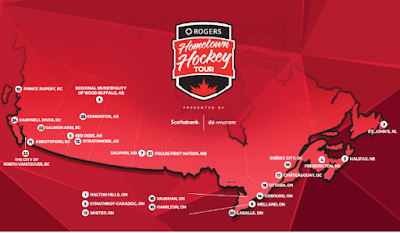 For the launch of this season, if the memories of past seasons are an indication, next Saturday night's Opening to the 2019-2020 campaign should make for a good matchup on the ice.

With Rampage fans getting the chance to see what kind of roster the Steelheads have put together after a month of tryouts in preparation for their return to play, a roster that will feature a mix of veterans from past campaigns and a healthy number of new recruits looking to write the next chapter of Steelheads hockey. 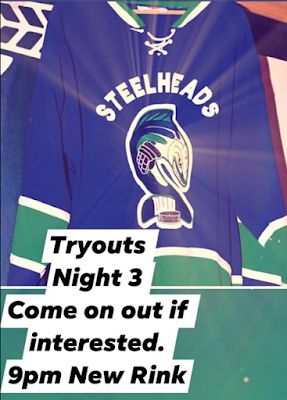 When it comes to hearing more on the local team, you can share some time with the hometown side following Saturday night's game, when the Rampage take part in an after party at the Seal Cove Neighbourhood Pub.

The post game event offers up  a chance to chat with this years edition and greet some of the veterans and newcomers set to represent Rupert through the season. 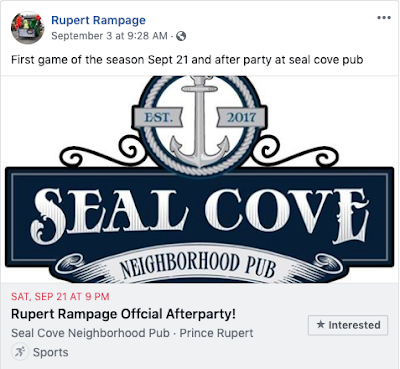 You can keep up to date on the developments from the Rampage through their Facebook Page.

As well, we offer up some notes on the Rampage through our Schedule/Scores page as well as our archive of notes on the CIHL, which not only features items of interest on the Prince Rupert Rampage but from the other six outposts of the Senior Men's Circuit.
Posted by . at 9:41 AM