Nathan Cullen is coming to your door to say goodbye.

However,  you don't have to put on some coffee, or stock up the beer with fridge, as his arrival comes through your mail box, That as the long time MP for Skeena-Bulkley Valley bids his farewell to his time in Parliament with a household mailer.

The MP's letter, along with a collage of some of his favourite or most memorable photos has been popping into mail boxes across the city in the last week, providing for a few parting thoughts on fifteen years of elected service to the Northwest.

With fifteen years to call back on, the message to constituents is focused on what the MP has taken away from his travels across Skeena-Bulkley Valley to hear the stories of those who call this vast expanse of the Northwest home.

"Someone once told me that in the northwest 'the people don't make the land, the land makes the people'. This land has made some incredibly hardworking, inspiring and caring people. Whether in the House of Commons or at one of the hundreds of town halls I have hosted I tried always to reference my thoughts and words in the northwest as the source and inspiration of those stories."

Many of the themes from the mailer were previewed during his farewell address to Parliament in June of this year, where he shared remembrances of his time in Ottawa and offered some advice for Parliamentarians as they face new challenges ahead.

Towards his work over those years, he notes of the past debates and discussions over themes such as the Northern Gateway, The Great Bear Rainforest, open net fish farms, off shore drilling and protection for rivers and oceans.


To close his time in service of the residents of the region he turns to the current election campaign and the task ahead for the successful candidate on election day next month.

"Whoever we choose as our next representative they will take up the task of ensuring we receive even more attention and consideration in the nation's affairs. We deserve no less and I wish them courage, wisdom and the strength to do the job well"

Through much of his review of the years now past, the MP notes of his promise to put "Skeena back on the map" and as you receive his farewell missive this week, whether you were a supporter or never cast a vote for him through those fifteen years, one thing is certain, he did bring his talking points from the riding high to the Agenda for the House of Commons during that period of time.

The full text of his message can be reviewed below: 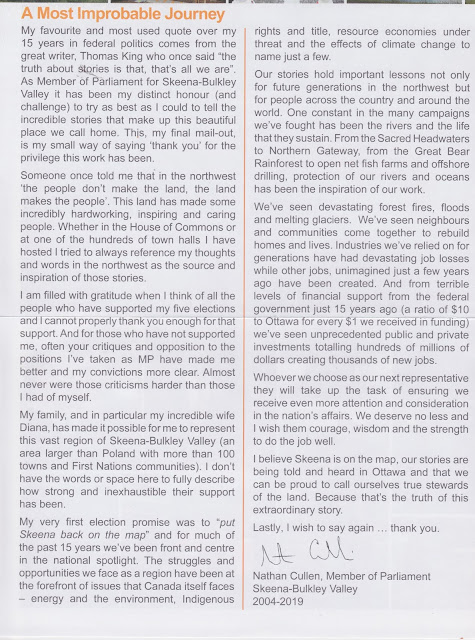 While Mr. Cullen prepares to write the next chapter in his life,  the voters in Skeena-Bulkley Valley will select the next Member of Parliament to take tell their stories in Parliament on October 21st.

Whether those stories will remain in the hands of an NDP member, or be turned over to one of the other candidates looking to represent them will come with your vote on election.

To review some of Mr. Cullen's past work in the House of Commons see our archive page here.

As for the current campaign to take the former MP's seat in the House, follow the latest notes on the campaign trail from our Election 2019 page here.
Posted by . at 10:37 AM