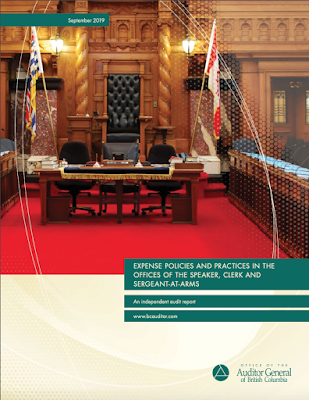 As things turn out, Speaker Daryl Plecas is not the only one who can explore the finances and policies of the Speakers office at the BC Legislature.

In a report delivered on Thursday, British Columbia's Auditor General Carol Bellringer  also took some interest in how the taxpayers dollars are being spent and from her findings we have learned that she didn't particularly like some of what she discovered.

In her prologue to the Report, Carol Bellringer noted that her work was a follow up to the events of last year which put the Speaker's office in the media spotlight and at times into a fair bit of turmoil.

While LAMC acknowledged that my office could design the audit as we saw fit, they had a particular interest in knowing more about the detailed expenses claimed by the Clerk, the Sergeant-at-Arms and the Speaker. This performance audit report looks at whether expenses of those three offices were governed by policy.

This is the first in a series of our reports on the Legislative Assembly. We have been briefed on many aspects of other work that is ongoing, we continue to monitor progress, and we are designing additional performance audit work to respond to any further requests of LAMC and to address risks that we believe would benefit from such an audit.

Among the findings from the Auditor General's review of Thursday, were weaknesses and gaps in the expense policy framework with policies at times not followed at all. Travel policies in place in BC that are not allowed anywhere else in the BC public service as well as purchases that did not have a clear business purpose.

Ms. Bellringer also noted that there was no effective mechanism in place for reporting policy violations and how purchasing card usage violated the policies of the Legislative Assembly. 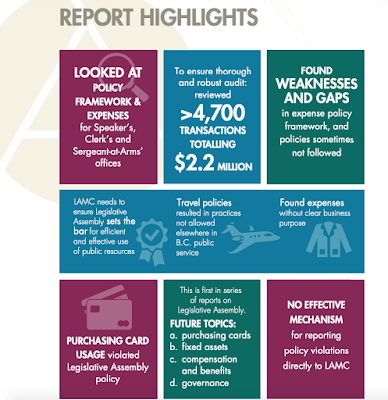 Speaker Daryl Plecas who has been in the eye of a bit of a hurricane of late at the Legislature, once again plays a central role in the narrative of events, with the spending accounts of his office seemingly on a rather strident march upwards having tripled the amount of travel expenses from 2017/18 to  2018/19.

The report included a summary of nine recommendations towards improving the oversight of affairs of the Offices of the Speaker, Clerk and Sergeant-at-Arms. 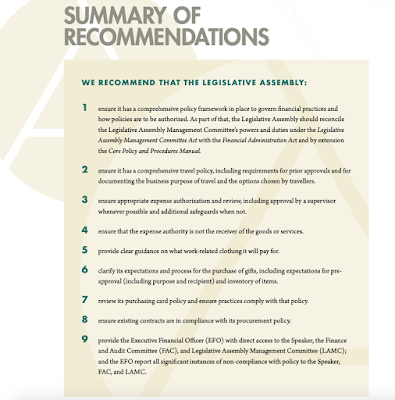 Those nine recommendations have received a response from the Legislature and are included in the report.

The Auditor General also made note that owing to recent events, there is currently an RCMP investigation underway and that with the suspension of the former Clerk and Sergeant At Arms her own financial statement audit work had been put on hold.

The RCMP is investigating possible criminal matters, and my office is not involved in this work. We also don’t anticipate being involved in the investigation under the Police Act or the workplace review at the Legislative Assembly. Furthermore, it is important to note that this audit would not be considered a forensic audit, although that description has frequently been reported in the media. Forensic audits are generally performed by specialists in support of civil or criminal court proceedings.

The Office of the Speaker has been a frequent topic of note out of Victoria over the last two years, a sample of some of the drama that has put it in the spotlight can be reviewed below:

May 31 2019 -- Chaotic end to Legislature session, leaves Speaker Darryl Plecas once again the centre of attention!
January 2019 -- Report from Speaker Plecas makes for page after page of revelations on Legislature spending
November 2018 -- BC Legislature breaks for Christmas with NDP looking to showcase highlights; but trapped by public's view of chaotic end
November 2018 -- Controversy swirls around Legislature Speaker over ousting of officials
September 2017 -- Testy opening for Throne Speech as NDP introduce Liberal Daryl Plecas as Speaker

As she wrapped up her findings from her review, Ms. Bellringer noted that many of her concerns had been raised in the past and had gone unheeded, though she did acknowledge the work now underway to make for improvements in the way the Office is administered.

Throughout this audit, we observed that basic governance practices were also widely misunderstood. Reports from my office in 2007, 2012, and 2013 made observations and recommendations to strengthen the Legislative Assembly’s financial practices. The reports went on to point out the importance of the role of those charged with governance and noted that LAMC, the Speaker, and the Clerk are not effectively operating as a governance and management oversight body.

While I have similar concerns as previous auditors general, much work is being done by those charged with governance and management at the Legislative Assembly to improve administration. The Legislative Assembly represents the interests of the people of B.C. by debating and passing laws, reviewing and approving budgets, scrutinizing the executive branch of government and overseeing provincial public services.

As the body that makes provincial laws, it is reasonable to expect that its own operations should be setting the bar for controlling, overseeing and ensuring the efficient and effective use of public resources in an organized fashion. We encourage those charged with governance to work collaboratively with each other and the Legislative Assembly executive team to raise the bar.

Her final call for a raising of the bar, no doubt a welcome refrain and one that residents across the province will hope is taken heed of quickly.

For more items of note related to the Legislature see our archive page here.

Media notes on the Auditor General's report and other BC Politics notes can be explored from our political portal D'Arcy McGee.