A much anticipated  report from Speaker Darryl Plecas was delivered to the Legislature Committee tasked with overview of Legislature Affairs on Monday. And from its seventy three pages of review and assembled background notes, the first impression for a reader is one of a sense of entitlement that seemingly flows through the Legislature hallways.

Normally these reviews of questionable spending put the focus on the elected MLA's and Cabinet Ministers that wander those halls and speak in the Chamber, a group somewhat used to the public scrutiny.

But this report, which comes following the November Suspension of two high ranking Legislature Officials Craig James and Gary Lenz, traces some bizarre spending and travel from those who are normally found well off the political and media radar in Victoria.

The Executive Summary from Speaker Plecas  is a fairly damning checklist of concern:

Broadly speaking, the matters which gave me concern related both to certain specific conduct of the Clerk and the Sergeant-at-Arms, as well as the functioning and culture of the Legislative Assembly as a workplace more generally. As detailed in this Preliminary Report, what I have observed at this stage, and been informed of includes, but is not limited to, the following:

• expensing of all manner of personal purchases to the Legislative Assembly, totalling tens of thousands of dollars over a period of less than two years;

• inappropriate payouts of cash in lieu of vacation, which appear to total in the hundreds of thousands of dollars;

• lack of oversight or appropriate protocols in the awarding of employment benefits, and evidence of attempts to obtain highly questionable further benefits, collectively representing actual or contingent liabilities to the Legislative Assembly totalling in the millions of dollars;

• instances where thousands of dollars of alcohol and equipment may have been misappropriated from the Legislative Assembly;

• various concerns relating to management of employees, including potentially retributive or otherwise unjustified terminations; and 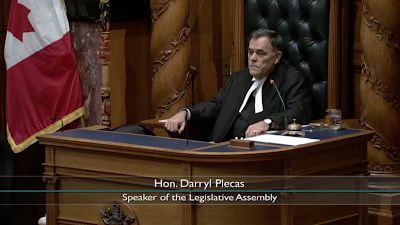 And as the Speaker tells the tale, his first concerns over the state of the unbridled spending for the House came from his very first tour of his new office after being appointed Speaker.

Although initially my attention was primarily focused on the proceedings of the House, there were some aspects of my new trappings which I immediately found to be surprising. On my first day as Speaker, I was being shown around my new office by the executive assistant to the Speaker who had worked there for many years.

There was a jug of water, a bucket filled with ice and fresh flowers sitting on a cabinet and I was advised that the water and ice would be refreshed twice a day and the flowers replaced every other week. I opened the cabinet and saw that it was full of liquor. Looking at the bottles, I recognized one of them and remarked, “gee, that’s an expensive bottle of scotch.” My new assistant said, “Mr. Speaker, you can have any kind you want if that is not good enough”.

Later that evening I looked in the cabinets outside my personal office in the main area and discovered that there were two more cabinets also filled with liquor. It had been my previous experience that the government does not pay for alcohol for staff or Members’ personal consumption, so this was surprising to me.

What follows in the report, is a rather thorough account of travel and discussions with Mr. Lenz and Mr. James, with Speaker Plecas seemingly rushing back to his office or hotel room to make sure he had his notes in place from each day's newest revelations.

The two things that jump out from the document include the apparent lack of any kind of oversight related to the Legislature spending and that when it came to major purchasing, no potential source slipped by their focus or government credit card.

Among the more fascinating snapshots on spending:

A trip to England by a delegation of Legislature staffers to purchase a Speakers' Hat, with a fairly healthy list of other purchases from some of London's most exclusive shops included to the European junket.

The purchase of a log splitter, ostensibly with the view that should a major disaster strike one of the Legislature trees, the Legislature's Chamber staff would be prepared to step in one imagines where the public maintenance department would fear to tread.  But first they would have to retrieve the log splitter from a private residence.

An apparent affection for iTunes subscriptions,  a collection of magazines worthy of a library or dentist or doctor's office and a rather large and strange listing of sundry purchases dot the exhibits pages.

And as Mr. Plecas noted on his very first day in the Speakers Chair, the place was simply awash in Booze some of which managed to make it off the Legislature property it would appear.

Beyond the lengthy list of questionable purchases, the way that human resources has been handled in the Legislature precinct is also of some focus, with staff dismissed with little explanation and the appearances of a somewhat toxic work site as the Speaker explains it.

In his report Speaker Plecas also makes note of his hiring of Alan Mullen as a Special Advisor in January of 2018, a hiring which proved to be a somewhat controversial thing once disclosed; as part of the background to the suspension of Mr. Lenz and Mr. James the Speaker notes that he and Mr, Mullen brought their concerns to the RCMP in September of 2018

None of the allegations have been proven in court and there is currently an RCMP investigation underway related to the suspension of the Legislature officials following the drama of December.

Representatives for the two men also expressed their concerns Monday that the report was made public without opportunity for a rebuttal, or reply to the accusations.

You can examine the full report here, the lengthy list of exhibits is available here.

The report does seem to take some of the heat off the Speaker who found himself in the spotlight following his startling moves of November and December. What the documentation now does is set the table for the outcome of the RCMP investigation, and what will now be a large and very interested audience in their findings.

Members of the full Legislature will have a chance to comment on the report on February 12th when the Legislature reopens for the next session.

From the delivery of Monday's report,  the first reviews from politicians and media observers alike has been made up in the way of shock at the scope of the atmosphere of the Legislature precinct and the spending within it, as well as some of the more unusual areas from which the publics' money was put to use.

Needless to say, Monday's Chronicle of questionable spending has been the main focus for the province's most prominent political observers, you can review the list of the contributions to media overview so far from our political blog D'Arcy McGee.

For more notes about the British Columbia Legislature see our archive page here.

To return to the most recent blog posting of the day, click here.
Posted by . at 11:49 AM