Council should not dismiss the public based on perceptions; but rather hear out their frustrations

One of the underlying themes of Monday's Council session was the somewhat dismissive nature of some of the Council members when it comes to the frustrations over the current Boil Water situation.

Monday's update from the city's elected officials started off quite well, providing for an informative bit of material; notes which while repetitive from past efforts from the Mayor's many Facebook posts, did deliver a few new nuggets of information, along with two helpful online resources for residents to review.

With both the Frequently Asked Questions page and the more detailed overview of the city's watershed strategy very useful to better understand the current problems, even if they don't offer an immediate solution to the Boil Order Notice.

Helpful as those two items are, the chance to ask questions of city council members is still something that residents like to take advantage of and after over a month of boiling water, some perhaps were hopeful for the chance to weigh in on the topic on Monday.

Though as the session began Acting Mayor Wade Niesh was  quick to dash those hopes.

While the official agenda featured only two items for review, both of which were taken care of in less than four minutes, Mr. Niesh proclaimed that Council would hold to the protocol and not allow for public comment on the evening, advising that residents could return in two weeks if they wished to make public their concerns or questions on the Boil Water Notice.

Now protocol is important to conducting public meetings, but sometimes it's just wise to maybe go with the flow (if you will) as to the current situation.

Considering City Council had hosted only one meeting in December, four days before the Boil Order Notice, there was an awful lot of time between December 10th and January 14th where Council members had nothing to say and residents had no forum (other than social media) to express their concerns.

A City Council Session is not the Supreme Court, or even the House of Commons, the rules are not set in stone and an exception for a situation such as the Boil Water situation should have offered up the common sense option for Council to break with the protocol and allow for comments.

Even the House of Commons allows for an emergency debate, should a member request it, on Monday however, the four remaining council members on hand for the night offered up no comment as Mr. Niesh rolled out the rules of order.

As it is, the main impression from Monday's very quick shut down of any possible comment from what small number of residents that were there is;  that Council is probably hoping that the situation at Shawatlan Lake has resolved itself  before the next Council session and that everyone will have forgotten about what the city has described as "the inconvenience" of five weeks and counting of Boiling Water.

Things took a bit of a downward spin as the meeting moved forward with a few comments from Acting Mayor Wade Niesh and Councillor Reid Skelton-Morven towards those residents who have spoken out on Facebook over their concerns on the water situation over the last five weeks..

The use of Facebook, which is something that the city's Mayor and a few of its Council members use quite regularly to share their good news items of civic government, is after all a two way Internet boulevard of communication.

Sometimes Council will hear back on things that aren't going quite so swell ... calling those that apparently dare to comment "trolls" or outsiders, as Councillor Skelton-Morven did, or suggesting as Mr. Niesh noted, that their comments aren't quite as relevant as other more favoured sources, probably isn't a wise strategy.

An impression of disappointment on how Council handled the Monday meeting has been an ongoing theme for one resident, a newcomer as it turns out, who has been looking to keep the public eye on the water troubles through a group known as Community for Clean Water.

As we noted on the blog on Tuesday, Tom Kertes a volunteer organizer for the group, spoke to the Council session with the CBC"s Carolina de Ryk on Tuesday morning, providing a few thoughts on how he viewed the night from the public gallery.

He has since added to that overview by way of a letter to the editor of the local paper.

Neither contribution provides for an image of a City Council that was ready to listen to its residents on Monday, the main take away from both of those reviews is how it appears that at times  some of the Council collective appear to be rather mad at those that may have legitimate questions.

Adding on to the observations of Monday's council session was MLA Jennifer Rice, who last night delivered a statement on the current boil water notice in Prince Rupert, as well as a few thoughts from Monday's session.

Her correspondence was followed one hour later by a missive from Mayor Lee Brain, who posted his own commentary towards the Boil Water notice and the events of Monday.

Ironically in the scope of Mr. Niesh's concerns on social media, the comments were delivered to the Mayor's  Facebook page. 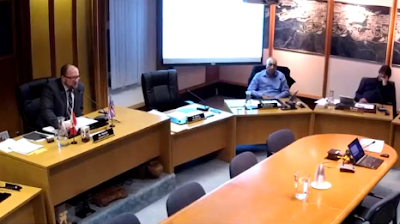 One other note from Monday's council session also stood out and that was the attendance count of the elected officials on the night. With both Mayor Lee Brain and Councillor Blair Mirau not on hand for the debut meeting for 2019, one that Council members surely knew was going to be a fairly important one.

Their absences were somewhat surprising, particularly when you consider that the community had signalled the water concerns as important since the Boil Order was issued in mid December.

As Acting Mayor Wade Niesh moved quickly through the rather light agenda, there was no mention as to the absence of either Council member, and that is an oversight that should have been addressed.

If the two elected officials are on personal time or dealing with family issues, that's fully acceptable, everyone needs a break even if it has been over one month since the last Council session.

However, some kind of public policy on attendance should be introduced by the City to provide for transparency on council matters moving forward.

If a Council member is absent from a meeting and on official civic business, that should be noted on the city website and the details related to the travel published; including how long any elected official, or senior staff member for that matter, is out of town and what the nature of their travel is about.

As well, at some point the City needs to compile a quarterly list for the website, in order to outline what kind of expenses the city's representatives have incurred from such things as workshops, additional meetings, training sessions, or any other out of town travel by its elected officials and senior staff.

At a time where every penny literally counts to achieve all the infrastructure goals of City Council, having a publicly available listing on the city website as to how the city is spending the money, should also become part of the new dialogue at City Hall.

You can review our notes from the Monday City Council session through our Council  Timeline, more items of note on Council Discussions can be reviewed here.