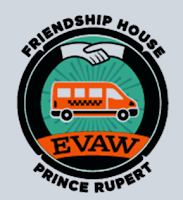 Highlighting a program which has helped to fund the Friendship House bus connection between Prince Rupert and Terrace, a service which operates on a twice-a-week schedule on Tuesday's and Thursday's.

As part of Monday's provincial overview of the program, Friendship House Executive Director Anna Zanella outlined some of the focus for the Service which departs from and returns to the Friendship House on Fraser Street.

“The Friendship House Association of Prince Rupert is proud to provide a transportation service between Prince Rupert and Terrace twice weekly, on Tuesdays and Thursday. Feedback is positive as passengers enjoy the affordable service at $5 per seat each way.

The impact of this transportation project has been immense, as transportation opportunities out of Prince Rupert are very limited. Passengers can stay connected with adjoining communities in the region for employment, education, medical, extended travel and personal needs.”

The Friendship House program is one of twelve that the province has funded in Northern BC, a funding program which delivered grants that were primarily focused on Indigenous communities and organizations, enabling them to purchase and operate a community vehicle (such as a van, mini-van, SUV or bus) to transport people to jobs, school, appointments and shopping, as well as connecting them with family and friends.

Some further background on the community vehicle funding program can be found here.

North Coast MLA Jennifer Rice also contributed to Thursday's information release from the provincial government. Noting how the program has worked in conjunction with the province's own BC Transit network in the region.

“It’s wonderful to see the community vehicle program is providing a safe ride home for so many people who live and work in northern B.C., in particular, for those in remote and Indigenous communities. This program is working in conjunction with the newly established transit routes by giving people safe, reliable and affordable transportation options.” 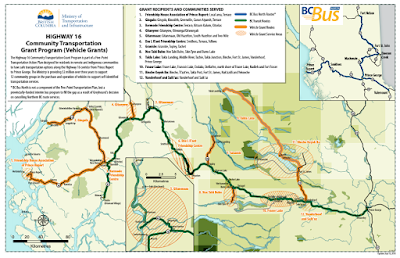 That BC Transit network mentioned by Ms. Rice provides for regular service to connect communities from Terrace and Kitimat through to Prince George providing for a shuttle bus service that has proven to be very well received.

Ironically, the riding that Ms. Rice represents is the only one not participating in the BC Transit shuttle bus program.

It was an initiative that was introduced by the BC Liberal government back in 2016 as part of the Highway 16 Transportation plan, something that the North Coast MLA frequently championed as a long desired need during her time as a member of the NDP opposition before forming the government.

Back in December of 2016, the City of Prince Rupert and regional partners chose not to participate in that regional approach to the transportation issues of the Northwest, leaving the North Coast off the BC Transit map when it comes to the shuttle bus service and leaving Prince Rupert and area with fewer options for travel than those of the other communities along the Highway 16 corridor.

For its part Prince Rupert City Council has never brought the topic of participation in the BC Transit Shuttle service back to the council chamber for public review or reconsideration since that original decision of 2016.

Like all of the other communities of the Northwest, Prince Rupert is also served by the BCNorth Bus and those that qualify can also take advantage of services offered by the Northern Health Connections Bus.

For more background on transportation along Highway 16 and its feeder routes see our archive page here.

An overview of MLA Rice's work at the Legislature can be found from our MLA's archive.

To return to the most recent blog posting of the day, click here.
Posted by . at 11:14 AM

Email ThisBlogThis!Share to TwitterShare to FacebookShare to Pinterest
Labels: Community bus program celebrated by BC government