The Port of Prince Rupert released its finals stats for 2018 last week and the shipments out of the various terminal locations along the Prince Rupert water front are delivered some strong results through the last twelve months.

Movements of TEU's out of Fairview Terminal led the way with December delivering a significant spike in the year to year numbers, with December 2019 finding 908,000 tonnes of cargo passing through the facility making for a year end total of 10,360,090.00 tonnes.

The strong results continued for Ridley Terminals as coal exports to Asia continued on at torrid pace, with Ridley shipping 917,000 tonnes of coal in December, topping the 9 million mark for the year end totals, a significant jump from 7.5 million tonnes shipped at the end of 2017.

The ongoing expansion of the Pinnacle Pellet production facilities is also having a major impact on the Prince Rupert Westview Terminal, And while December delivered a reduced number of shipment totals from December 2017, the Overall shipments in 2018 topped the 1.2 million mark.

The success that the Westview Terminal has found this year was celebrated by the Port of Prince Rupert last week, which noted that the year end results, herald the start of increased results for the future and the placement of Prince Rupert's shipping facility as a national leader in biofuel exports. 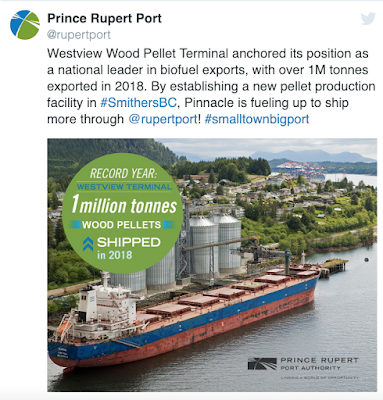 To address the issues of last year, CN Rail introduced an aggressive program of infrastructure work through this year, adding a large volume of rail sidings and double tracking along the Northern Mainline from Alberta to Prince Rupert.

You can review the full report from the Port Here, which offers a report available for download that expands on the snapshot of terminal performance throughout the region.

For more notes related to the Port of Prince Rupert and the range of terminals that are located on the Prince Rupert waterfront see our archive page here.


To return to the most recent blog posting of the day, click here.
Posted by . at 11:43 AM

Email ThisBlogThis!Share to TwitterShare to FacebookShare to Pinterest
Labels: Port year end numbers are in