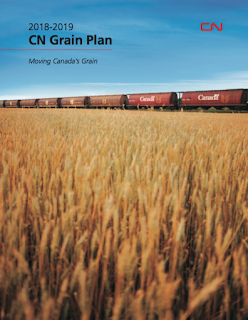 The trains are rolling westbound with regular frequency these days as CN Rail ramps up its operations for the winter shipping season, with hopes that they have addressed many of the troubles that plagued the delivery system one year ago.

Weather conditions which the railway can't control accounted for some of last year's delays in getting product to Prince Rupert and Vancouver grain terminals, but other internal issues also played a role in slowing down the shipment process and in the year that has passed CN has made for a number of changes to its operations that they believe will help deliver strong results this year.

As part of the Federal Government's review of last years problems, CN was required to develop a Grain Plan that outlined how it has addressed past issues and forecasts what they anticipate will be the shipment levels for this year.

The document which you can review here, notes that in British Columbia significant infrastructure improvements have been made to make the transit from the prairies to Prince Rupert a more time sensitive one.

Among the key notes:

Staffing levels also provided for some of the delays from last year, with CN rebuilding its lists of qualified conductors, looking to add 1,250 new conductors to their national network, when the expansion program is complete CN will have approximately 7,800 qualified engineers and conductors in service.

CN has also put in motion the acquisition of 1,000 new high capacity Hooper cars to upgrade the current fleet of 11,500 hopper cars across Canada.

The railway has also put forward purchase plans for 200 new locomotives over the next three years, with 60 to be in service by next month, the join a fleet of locomotives that currently number 1,900.

The most recent statistics from the Port of Prince Rupert to the end of October indicate that shipments through Prince Rupert Grain are down eleven percent from this time last year.