Premier John Horgan was on hand for the latest in housing announcements from the BC Government, speaking at Tuesday's roll out of plans to bring some additional housing to stock some areas of the Northwest, with Smithers, Telkwa and Haida Gwaii to benefit from a portion of the funding.

The three communities will see just over 3 million of 492 million dollars put aside for the new affordable rental home program.

Queen Charlotte received funding of $400,00 which will see one project consisting of four homes delivered as part of the program.

Smithers received the bulk of the money for the Northwest, 1.5 millions which will see fifteen homes for families and seniors built.

Telkwa will receive 1.2 million dollars for the construction of 12 homes for seniors.

There was no funding allocation provided for housing initiatives in Prince Rupert, Terrace or Kitimat in this first round of the funding program.

As speculation over LNG and other industrial projects became common in the region, all three Northwest communities have expressed concerns over the affordable housing issues that have been faced by their residents, calling for some assistance from the province to address the growing affordability gap in the Northwest.

On Tuesday, Premier Horgan put a focus on the past, as he outlined the province's plans for the new mixed income rental homes to be developed through the Building BC Community Housing fund.

“Years of inaction on the B.C. housing crisis left families struggling to get by and unable to get ahead,” ... “These new, affordable rental homes are an important step toward addressing the housing crisis and giving families in every part of the province a break from skyrocketing housing costs.” The 4,900 units announced yesterday make for the first additions to the list of housing initiatives that will be delivered through the Community Housing Fund.

As the map below indicates, the majority of those housing opportunities so far have been delivered to the Lower Mainland, Vancouver Island and the Okanagan corridor from Kamloops to Penticton. 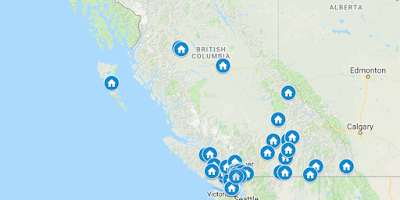 The list of all of the projects approved for this round can be examined here.

The communities were chosen as part of a request for proposals that was issued in April and closed in mid September, more detail on the Community Housing Fund can be found here.

For notes related to housing issues across the Northwest see our archive page here.