Counter Attack program to launch across British Columbia this weekend

Tis the season to make sure you have a ride home if you've been celebrating the season, with ICBC announcing that the RCMP and municipal forces across the province will be launching the annual Counter Attack program this weekend.

The road safety initiative will see patrol officers setting up traffic stops around the province, including the Northwest, to make sure that those on the roads have not over indulged, and this year, with the arrival of the legalization of cannabis that will mean police officers will be watching for impairment from legalized pot.

The pro-active enforcement program returns with statistics that show how that there have been an average of 68 lives lost every year owing to impaired driving. 19 of those lost lives were recorded in the North-Central portion of the province. 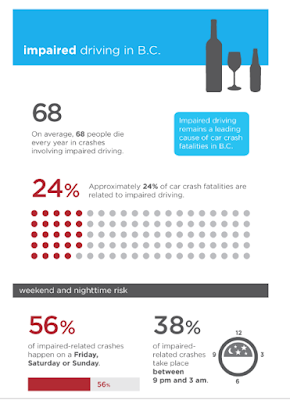 ICBC has sponsored the annual Counter Attack program for over forty years, with Mike Farnworth, the Minister of Public Safety and Solicitor General offering up a few thoughts on the success of the program.

"Generations of B.C. drivers and passengers have grown up with CounterAttack's deterrent messages and stepped-up seasonal enforcement. With cannabis now legal in Canada, we're determined to preserve CounterAttack's life-saving benefits in detecting alcohol- and drug-affected drivers and removing them from B.C.'s roads."

The annual holiday season campaign may also be the template for a wider introduction of Counter Attack programs throughout the year.

This week ICBC announced that it was shifting a large segment of their advertising campaign funding towards expanding the Counter Attack program beyond the Christmas/New Year period. A move that the insurance company says will help to get more police officers on the roads to provide for expanded enforcement.

You can review some of the highlights of the Counter Attack program here.

The RCMP's E Division, which oversees policing across British Columbia also made note of the start of the Counter Attack program, issuing their own information update on the launch of the annual enforcement plan.

For more items of note on the work of Emergency Responders in the Northwest see our archive page.
Posted by . at 9:11 AM

Email ThisBlogThis!Share to TwitterShare to FacebookShare to Pinterest
Labels: Counter Attack program to start this weekend