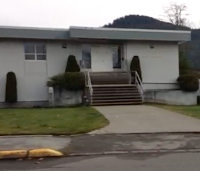 The newly elected Board of Education met in their first session last week, with the seven members taking their seats and making some administrative changes to start their four year term.

One of the first items of business at the November 7th session was to elect the membership to their positions on the Board of Education a process which named James Horne as the new Chair of the School Board, he takes over from Tina Last who previously held the Chair position as part of her thirteen years of leadership with the Board.

Ms. Last who was returned to office in the October 20th election, took time during the meeting to pay tribute to former trustee Terri Lynne Huddlestone, who received a plaque in recognition of her service to the community during her term of office.

The remainder of the Executive Board for the SD52 board will see Kate Toye in the Vice Chair position, she received the largest volume of votes in the October vote.

Elected to the BCSTA Provincial Council was Louisa Sanchez, with newcomer Kristy Maier named as her alternate.

The School District has also announced the placement of members in committee and school liaison positions, you can review that list here.


Other business at the first meeting for the new Board membership  included a presentation from Pacific Coast School, with Principal Jeremy Janz and students Gage Ryan-Devison, Taylor Wilson and James Barton providing some background on a recent class trip to the Lava Beds of the Nass Valley.

The students took the journey inland as part of a program known as TRECC. That is a project which helps to develop Teamwork, Respect, Environment, Culture and Community and  puts an emphasis on student engagement through challenging place-based hands-on learning.

Following the presentation, Board Chair Horne made note of the value of such student experiences.

“Gage, Taylor and James were very well spoken and are great representatives of their school and our district,” said Board Chair James Horne. “The Board is proud of our students and staff, and was pleased to hear from guides and elders that they show tremendous respect on their TRECC trips.”

The Board also passed a motion to offer support to be forwarded to the First Nations Education Steering committee. With the SD52 Board offering its support towards a requirement for a mandatory First Nations Course as part of the graduation process.

The recommendation is part of a range of initiatives that were included as part of the Truth and Reconciliation Commission. The Recommendation was Number 63, which calls upon the Ministers of Education, Canada to maintain an annual commitment to Aboriginal education issues.

You can review the full account of the November 7th Board meeting here.

For more items of note related to Education in the Northwest see our archive page here.

Email ThisBlogThis!Share to TwitterShare to FacebookShare to Pinterest
Labels: SD52 Board Meeting Nov 7