A wide ranging overview of the British Columbia fishing industry has taken a global approach to look for answers to some of the many issues that have delivered tough times for those that rely on the fishery for their living.

Just Transactions, Just Transitions is 100 page review of fishery issues compiled by Ecotrust Canada and the T Buck Suzuki Foundation, the findings explore the history that has led to the struggles currently faced by participants in the British Columbia industry and looks to potential solutions found in diverse corners of the word.

The eight member team which put together the report features some familiar names for the North Coast fishery, led by Tasha Sutcliffe, the Vice President and Director of Fisheries with Ecotrust Canada, along with Devlin Fernandes, Manager of Community Programs with Ecotrust Canada. Also participating in the study is Des Nobels, a Director with the T Buck Suzuki Environmental Foundation.

The opening to the report catches the reader's eye fairly quickly noting that among the two most troubled sectors in Canada at the moment, the Vancouver housing market and the British Columbia fishing industry seem to have similar traits, the report tracing a line by line comparison that ties the two seemingly diverse concepts together.

In the case of the Vancouver Real Estate troubles, a housing summit of 2016 called a focus on global housing solutions to address the issues in the province's largest city.

And from that example, the authors of the report take a similar approach to their work, exploring 27 global fisheries, the Vancouver Real Estate market and even the licensing provisions of the Toronto taxi industry to frame their overview of a fishery in crisis.

The historical notes quickly deliver the hard findings of the last fifteen years, where the landed value of the catch decreased by 26 percent, the number of vessels on the coast decreased by 30 percent and 18 percent of the jobs in the fishery were lost, all of it in a period of time where the income of fish harvesters declined by 42 percent. 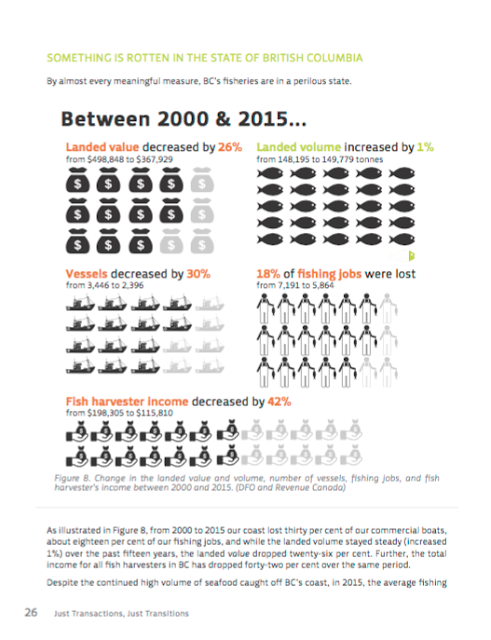 When it comes to the jobs lost, employment on the boats of the BC Fishery saw some significant losses during the thirty year period of 1985 to 2015.

The report charts the decline of employment from both large boats and small, with the smaller vessels of 65 feet or less and their crews bearing the largest of the two burdens, with 10,360 jobs lost for those on the smaller vessels.

Beyond the state of employment in the fishery, the report also raises flags of concern over safety issues in the current market environment, where financial pressures are leading to more and more risk taking when on the water.

"As fishery openings became fewer and shorter, the stakes of each opening got higher (including being able to make a living and support a family), and dangerous fishing incidents grew, fish harvesters became desperate for a solution. ITQs were lauded as the way to reduce hazards in fishing and ultimately, to reduce the risk of injury and death. To a certain extent this was true, however – like many other promises of ITQs – this benefit would prove short lived. Implementing ITQs may have eliminated the “race for fish,” but as ITQ critics claim, as quota purchase prices soured it was replaced by a “race to pay your line of credit.”

The report further notes that market pressures still create scenarios where fish harvesters are forced to fish in unsafe conditions, with an underpaid and often inexperienced crew. While vessels are in less than optimum condition, due to a lack of income to cover off maintenance costs.

The impact on fish quotas and the declining revenues on coastal communities is also explored, where the authors note that the large declines "have not come about through a drop in catch owing to environmental catastrophe or ungovernable natural phenomenon,  but more through a man made management structure that is anti ethical to sustainability and spells ruin for all but a lucky few in the casino economy of British Columbia."

It’s killed a lot of communities. You go to Bella Bella, you go to Hartley Bay, you go to Alert Bay even, you look at their fleets and ever since area selection and quotas, you’re down to – let’s say they had five hundred boats, they’re down to ten, fifteen. That’s from the quota. You can actually go into a lot of these villages and you can see on the beach the boats that they can’t maintain. My brother’s boat sank right in the breakwater in Hartley Bay. -- A First Nations fish harvester from the North Coast

The report digs deeper into the issues of Unrestricted Transferability and the lack of consultation that many feel surrounds the quotas and DFO's management of them.

To look for answers the report examined how fishery issues are handled around the world, using the following indicators as their guide:

To look beyond the fishery as to how contentious issues are handled, the report also looked at industry management approaches from two other sectors, the Vancouver Real Estate licensing process and that of the Taxi industry in Toronto.

From the 27 fisheries that they explored, five stood out for the authors as among the best approaches that they reviewed:

All of those reviews are available in the appendix to the document.

A glimpse at the three reviews of the West Coast of North America can be found below.

The first a look at the Bering Seas review, which examines the quota system in place. 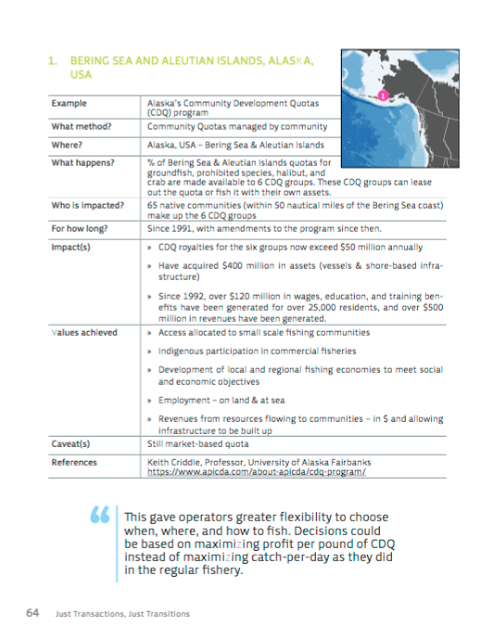 The second is the BC Licence and Quota bank, using the Ucluelet small boat fishery as the example. 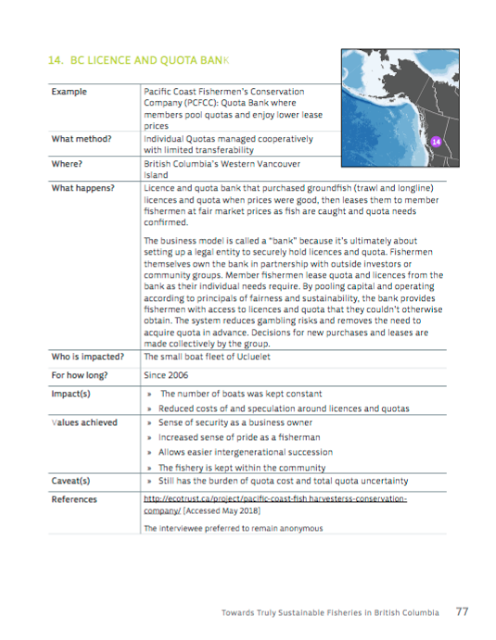 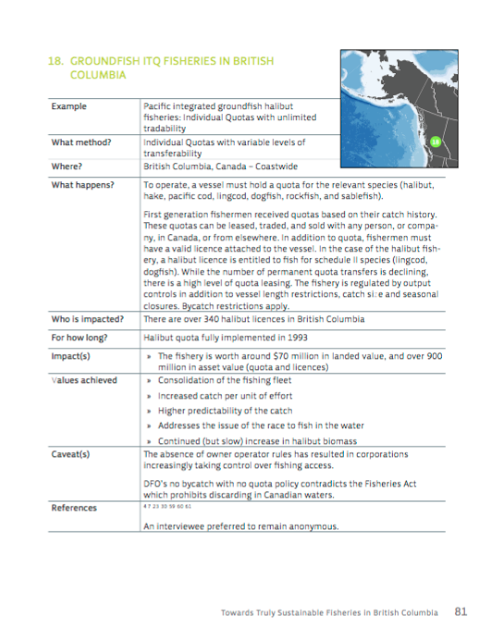 The rankings of their study make for the largest of the take aways from the report, a guideline to how the issues of British Columbia are not that much different from other parts of the world.

For the most part, there are no real large scale recommendations delivered, the report's focus more that of a call for more inspired thinking and innovation for the fishery in British Columbia.

This latest report continues in pursuit of these objectives by offering new analysis on alternative fisheries systems around the world today (including BC’s ITQ system), and by examining what they have to teach us. This research has been structured around a comprehensive review of 28 cases of fishery management regimes, assessed against 44 indicators for success.

Our intention is that by learning from these time-tested fisheries, and deploying those lessons across Canada, and specifically in BC, there are tangible and practical changes that can be made to realize sustainable fisheries – fisheries that can better achieve the mandate of the Canadian Government and improve social, economic, and environmental outcomes for sh harvesters, fishing communities, and Canadians at large.

As with our previous reports, we are hopeful that this work will inspire new thinking, innovation, and action by both industry and governments to realize the true value of our marine resources and protect their sustainability for future generations.


You can review the full report here.

For more background on the North Coast and Southeast Alaska fisheries see our archive page here.