George Baker finally gets to sleep in

After eight years of early, early morning risings, George Baker may be ready to sleep in ... if but for a few days.

Tomorrow will mark the last early morning shift for Day Break North's Associate Producer, the long time North Coast reporter who has been on the news watch for much of the last decade will bid his farewells, pack up his gear and make plans for a migration south.

Making ready for a step into the competitive Vancouver radio market his next step of a journalistic evolution, as he moves to the afternoons  mornings, on the staff of the CBC's Early Edition programming.

He leaves Prince Rupert carrying a fair share of the media's institutional memory with his belongings, arriving on the scene to take on duties with the Daily News in 2008, he provided the eye to the story that shaped the news of the day during some tumultuous times for the region.

Rupertites had their first introduction to the newly arrived correspondent in late July of that year,  making for the Hay's Notes version of the Life of George, tracing the long circuitous road to fame and fortune, well, OK perhaps more in the way of fame, than fortune ... in Prince Rupert.

Beyond stringing the sentences together on some of the larger stories of the time, he was there to cover what became that iconic Prince Rupert institutions final day.

Mr. Baker like the staff of the day at the Daily News,  was part of that July 2010 print wake for the publication, which came following a sale by Glacier Media to Black Press and the subsequent closure of the Daily.

One part memorial, one part celebration of work, the paper's passing turned Prince Rupert into a one paper town, the loss of the Daily still a significant shift in the local scene that has had an impact on the community to this day.

His final notes from the closure were one of many contributions on that Friday afternoon that recounted the demise of the once dominant news source for the region .

A short lived venture as a prospective newspaper owner with Chris Armstrong would chart some of the journey in Prince Rupert.

Then a shift to the spoken word and a much wider territory to cover; as the newspaper guy became a radio guy, taking on the duties of an association producer and again the stories would roll on.

One after another, he compiled the notes on the  major issues and some features somewhat removed from the themes of breaking news from across the Northwest, all covered with the same level of research, delivered to  your radios on a daily basis from 6 to 8:30 AM.

Moving over to radio, he and DayBreak North host Carolyn de Ryk  became more than just the voices on the radio over the years, and for the radio guy, that meant that beyond the filing of stories on the job, there was the physical beatings of the rugby pitch and the spotlight of local theatre with a number of community and Harbour Theatre presentations.


Tomorrow morning will deliver some of his final reports and maybe even a few passing thoughts as George Baker brings his days on the North Coast to a close from 6 to 8:30.

The Daybreak North archives also provide a wide cross section of some of the sounds and stories that have charted some of his travels across the Northwest.

Through the last week, Mr. Baker has been receiving best wishes through his twitter feed, where he first broke word of his pending departure. 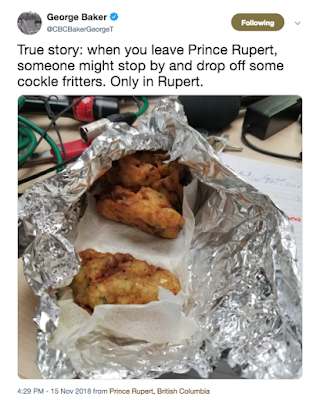 Along the way someone, as they always seem to do in Prince Rupert has delivered some food.

So, beyond his many memories of some ten years on the North Coast,  George Baker seemingly be leaving town well fed for the trip south

You can check in for one more DayBreak North show tomorrow morning and then split your radio loyalties between North and South.

More notes from our North Coast media files can be found here.

Corrections and such ... as would seem apparent, Early Edition would denote a Morning show, thus we have fixed our error of sending him to the afternoons ... those days of sleeping in, perhaps not as plentiful as we had originally indicated!