When the Northern Sea Wolf is introduced into service on the Central Coast in the Spring of 2019 it will be featuring the art work of two coastal British Columbia artists.

Last week BC Ferries introduced the two, Richard Hunt and Danika Naccarella, the pair were the successful candidates in a expansive look for art for display on the vessel, their submissions selected by an art review jury after a call for art in December of 2017.

The announced provided a preview of the artwork which will include the Sea Wolf design on the bow of the ferry, along with interior works to be put on display that reflect the First Nations legend of the Sea Wolf as a manifestation of the Orca.

Mr. Hunt has been the recipient of a number of British Columbia and Canadian honours and recognition for his work.

BC Ferries President and CEO Mark Collins, noted how the work reflects on the territory where the Northern Sea Wolf will sale and how their art will be profiled aboard the vessel.

“Richard and Danika have created striking designs which pay tribute to the people of the Central Coast and the territory where we operate  ... It has been a privilege to work with two exceptionally talented artists and we are honoured to display their designs on our vessel, the Northern Sea Wolf.”


Learn more about the artists and their work from this information package from BC Ferries. 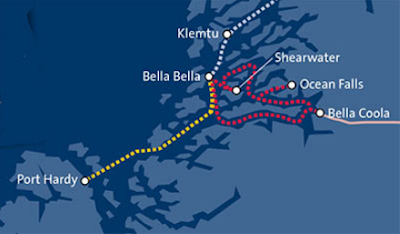 As part of the Summer schedule, the Northern Sea Wolf will be providing regular direct service between Port Hardy and Bella Bella.

Once a week it will also offer a connector service to link Bella Coola, Bella Bella, Shearwaer and Ocean Falls, its introduction into service will make for a significant boost to the tourism industry for both Northern Vancouver Island and the Central Coast.

For more information related to Marine Transportation on the North and Central Coasts, Haida Gwaii and Southeast Alaska see our archive page here.
Posted by . at 9:07 AM