Will the CanaPux change views on the shipment of oil on the North Coast?


If there's a future for oil shipments out of the North Coast one day in the future, it very well may resemble an end to end rush from a Prince Rupert Rampage hockey game.

A new process for the transport of bitumen is being explored that would see the bitumen resource turned into a solid form the size of a hockey puck, shipped in solid form.

Originally designed as way to take the risk of shipping crude by rail transport across Canada and now perhaps as a way to ship Canadian resources to Asian markets from west coast ports reducing, if not eliminating concerns over the prospect of environmental damage.

The concept is being put forward by CN Rail, making us of something currently being considered call the CanaPux, solid crude oil moved in the shape of a puck.

The product currently under development is blended bitumen and polymer which is then encased in polymer to reduce impact on the environment.

The main attributes of the proposed shipment state is  that the product won't leech, or dissolve into the environment, it won't burn, won't catch fire and there is no dust.

It is described by CN as an environmentally secure and protected way of transporting bitumen or heavy crude oil, with the product able to float in water, eliminating concerns around potential spills. 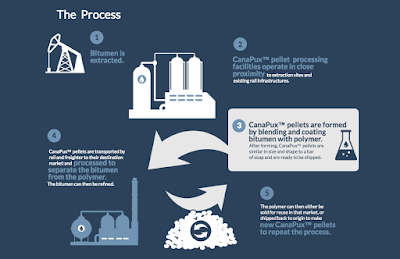 The primary application for the Cana Pux is to get the crude product from Alberta to tidewater and then shipped to Asian markets.

It would travel to shipping facilities on the coast by way of regular hopper cars as opposed to the current fleet of oil cars that make for much of the CN stock. 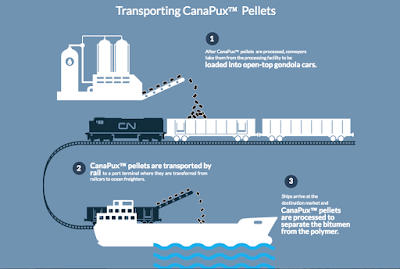 The video below form CN Rail provides some background on the work currently underway.

Canapux from CN on Vimeo.

The concept has been in the design and testing phase since 2017, more background on the process can be reviewed here.

An update on the progress of the CanaPux and its prospects for the future were explored on BNN Bloomberg last week.

The shipment of bitumen is currently not allowed under the Oil tanker moratorium on the North Coast of British Columbia, the Bill C-48 is working its way through the Senate process towards final approval.

Should CN advance the concept of the CanaPux into a large scale production process, the invention may revolutionize how the we ship crude to world markets. A shift in focus that the proposed product offers would expand the Canadian shipping industry and could make for a significant shift in how Port facilities are used and developed on the Pacific coast.

More items of interest from CN Rail can be found from our archive page.