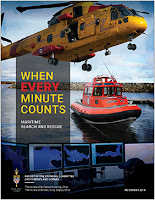 Increases in staffing, better funding and making more use of the Coast Guard Auxiliary and exploring the use of private contractors make for some of the recommendations from a Senate report which has reviewed the capacity of Canada's Coast Guard and it's Search and Rescue duties.

Should the Federal government follow through on the recommendations, the West Coast services of the Coast Guard could see some significant improvements and funding increases, something which could expand the Coast guard footprint on the North Coast out of the Seal Cove base in Prince Rupert, as well as for First Nation coastal communities along the British Columbia Coast.

The 71 page document with the title of When Every Minute Counts provides an extensive review of the services and resources available to the Coast Guard and finds that the Federal government needs to deliver more attention to the needs of the Coast Guard to attend to its duties across the nation.

The report digs deep into the way that Search and Rescue duties are tasked in Canada, making note of the partnership between the Coast Guard and Armed Forces and how the division of duties between the two is handled.

From its look at the history of the Coast Guard dating back to its creation in 1868, the review examines the various shifts in responsibility for the service, which in 2005 was merged into operations of the Department of Fisheries and Oceans,  something that a number of those providing background to the Senators suggests isn't working to the benefit of the Coast Guard. 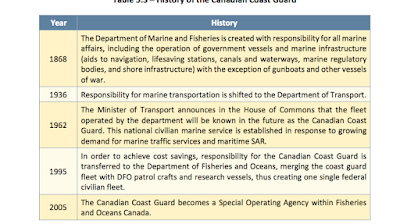 To address the need for a better approach towards delivering on its core duties of providing for Search and Rescue and Safety on the water, the Senate Committee made two recommendations:

That the Canadian Coast Guard be established as a separate statutory agency reporting to the Minister of Transport.

That Capital planning for the Coast Guard be extended to 20 years to reflect the need for the fleet's renewal, upgrade and modernization.

The Senate Committee travelled across Canada as well as to Europe to see what does and doesn't work when it comes to Coast Guard services and mission statements and how the Canadian Coast Matches up with some of the other services that they examined as part of the findings of their report.

Some of those discussions with the European agencies helped to shape some of the findings, including the final recommendation to return the Coast Guard to the oversight of the Transport Canada Ministry.

It was noted that a separate statute for the CCG along with a transfer to the TC portfolio would better align with its mandate and the approach taken by other jurisdictions, such as, for example, Australia, New Zealand, and the United Kingdom.

Solutions at home were also explored, with the Senate Committee noting that improved funding for Coast Guard Auxiliary services and expanding the relationship with First Nations communities could help to increase the ability to respond to incidents.

In British Columbia, the Senators recommend more training opportunities for Coastal First Nations, observing that often it is their members who are the first on the scene when a call for assistance issued.

Given the valuable experience gained to date by members of coastal and Indigenous communities as part of this course and the high demand for this training, the committee sees the Coastal Nations Search and Rescue Course as an excellent opportunity to improve maritime SAR response on the West Coast. The committee heard remarkable stories where Indigenous peoples were actively involved in maritime SAR incidents. Similar courses could be provided in other regions, including, for example, coastal communities in the Canadian Arctic that are experiencing an increase in maritime activity.

Indigenous peoples living in remote coastal communities are and will continue to be the first responders to marine incidents in their waters. It is the view of the committee that the time has come to meaningfully develop the capacity of local peoples willing to help respond to maritime SAR incidents in their regions as they arise.

With the coast guard facing staffing challenges today and the prospect of a twenty five percent turnover with retirement in the years ahead, the committee has called for an aggressive recruitment and retention strategy to address those shortages, recommending the Coast Guard target a wider pool of potential  employees.

The committee recommends that the strategy have a particular focus on attracting and retaining Indigenous cadets and employees within the Canadian Coast Guard organization.

The report also recommends that assistance be provided to Regional Coast Guard auxiliary organizations so they can diversify their funding sources.

The Report also urges the Government to provide the Canadian Armed Forces with the ability to increase and diversify its search and rescue workforce to respond to the increased demand for search and rescue.

The prospect of making use of private contractors was also explored in the report, with the Senators reviewing how the United Kingdom, Ireland, Norway and Australia make use of private resources to compliment their own services. 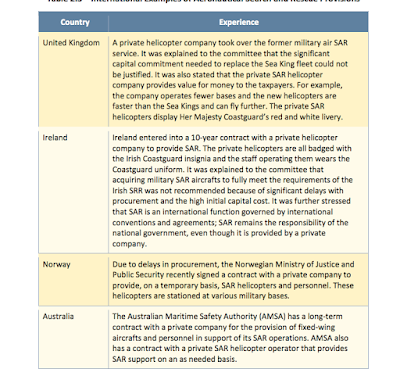 And while they don't recommend that Canada follow the lead of the us of private contractors as found in some of the services that were studied, they do see an opportunity for public/private partnerships.

The committee does not believe that privatization of aeronautical SAR (like in the United Kingdom, Ireland, and Australia), or another large government capital expenditure project for additional SAR aircrafts (or to rebuild the older ones), fit Canada’s unique requirements.

However, the committee believes that alternative service delivery – in the form of public-private partnerships that leverage the best of both public and private capabilities/resources – could offer, in the short- and medium terms, an innovative and cost-effective solution to supplement SAR resources in regions with little or insufficient coverage.

As part of the review, the Senate report also called attention to the risks involved in the commercial fishing industry, noting that it hosts the highest fatality rate among employment sectors in Canada.

The recurring finding of an average of 12 deaths per year in the commercial fishing industry is of great concern to the committee. The persistence of this number indicates that something must change. Along with witnesses, members of the committee believe that real and lasting improvements in fishing safety can be realized through changes to fishing vessel regulations, commercial fisheries management, and prevention.

Towards addressing those concerns, the Senate Report has recommended that Transport Canada amend its regulations to extend the mandatory use of Emergency position locating radio beacons, as well as to develop and disseminate user-friendly information regrading vessel stability to reduce unsafe practices in the commercial fishing industry.

The Senators also have set a three year timeline from the tabling of the report for Transport Canada, Fisheries and Oceans Canada, the Canadian Coast Guard an the Canadian Marine Advisory Council to work with Fish harvesters to develop an action plan on safety in the commercial industry. 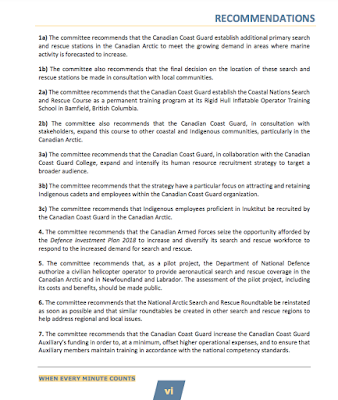 You can review the full report from the Senate here.

For a look at some of the work of the Coast Guard and other Emergency Responders across the Northwest see our archive page here.
Posted by . at 9:22 AM