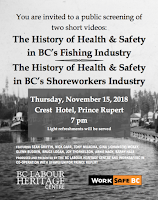 Some familiar names from the North Coast Fishery will be rolling through the credits of two short films to be featured this week in Prince Rupert, part of a project on the history of health and safety in the industry hosted by the BC Labour Heritage Centre and WorkSafe BC.

The short film festival takes place at the Crest Hotel on Thursday, November 15 starting at 7PM

The two films explore the history of health and safety in the commercial industry and for British Columbia's Shoreworkers. The commercial fishing video was put together last year and is part of the two part review, with the second film to focus on the work of Shoreworkers in the province.

Among those featured in the movie with a connection to the North Coast industry are Joy Thorkelson, Arnie Nagy and Barry Hale.

The films were produced and are presented by the BC Labour Heritage Centre, Worksafe BC, in cooperation with UFAWU/Unifor Prince Rupert. 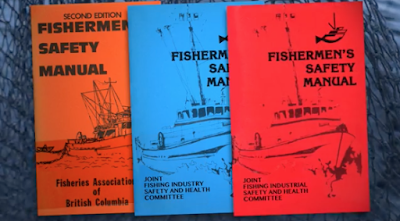 The latest accounts of those who have worked in British Columbia's industries will be added to the growing library from the BC Labour Heritage Centre, you can review all of their past work here.

Thursday evening's  showing on the North Coast comes as the Federal Transportation Safety Board has noted that the fishing industry is among the most dangerous of industries on the West Coast.

Last month on the blog, we noted the findings from the Transportation Safety Board's watch list for 2018 which made note the growing number of accidents and fatalities that have been noted from the industry in recent years.

More notes on the Commercial fishing industry on the North coast can be reviewed from our archive page.

Email ThisBlogThis!Share to TwitterShare to FacebookShare to Pinterest
Labels: Commercial fishing industry the focus for two short films to be shown in Prince Rupert