Prince Rupert Arts Council quest for additional funding will have to wait until 2020. 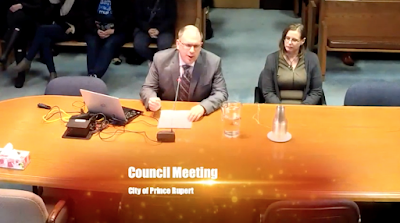 Prince Rupert Council heard a call for additional funding for the arts on Monday evening, as the Prince Rupert Arts Council sent a delegation to Council chambers to share word of some of their work in the community and to make the case for added funding for future projects.

Michael Gurney delivered the Arts Councils' themes on the night, with the focus for the presentation to review the 10,000 dollar civic grant that the organization currently receives with, Mr. Gurney making a call on behalf of the Council for an additional 10,000 to fund the their operations.

"The dynamic programming coordinated by the Arts Council has depended on an annual infusion of 10,,000 dollars, our appearance here tonight is to emphasize the urgency of and the opportunity for, an increase to our city's financial support for arts programming. The community enhancement fund application currently before you, due for a decision early in the New Year I understand, contains a request for 20,000 dollars to fund the Arts Council on an annual basis ... after more than two decades of doing more and more with the same dollars that buy less and less, an adjustment is finally in order" -- Prince Rupert Arts Council member Michael Gurney speaking at City Council on Monday evening.

To highlight some of the work that the Council has delivered, he outlined a number of the events and works of art that have taken place through the Arts Council, as well as the grants that they offer to local artists.

Gurney also noted how smaller towns and cities in the province have made a commitment to the arts for the betterment of the community and how Prince Rupert could tap into that goal.

"Commitments by BC towns many times smaller than Prince Rupert, such as Wells or Gibsons, have resulted in positive transformations and enviable reputations. Our city's collective vision for a redesigned Rupert must have at its heart the virtues that already distinguish the City of Rainbows, beauty, diversity, tradition and creativity"

Towards the future, the Arts council is hoping to provide better updates for City Council so the member of Council and city residents can learn more of their work and how they spend the city's investment in the arts. To close the presentation, the vision of art as a sense of unity for the community was put forward to the Council.

Addressing the funding issue, Mayor Brain thanked Mr. Gurney for his presentation and observed as to how the City is a strong supporter of Arts, making note of the Lester Centre as the vehicle of that support which he called a priority for council.

As for the Arts Council funding, the Mayor did relay that he had good news and bad news on the night, observing that in late October the City had passed the Enhancement Grant process, holding the line this year on funding.

As we outlined on the blog following the October 22nd Council session, the city has set aside $748,000 dollars for community enhancement grants for 2019, holding the line on funding for another year while they prepare to tackle the current process for reviewing applicants and develop a new process that will be different than how the city has handled the review over the decades.

You can review the October notes on the Grant process here, included in our notes is the list and amounts that groups will receive in 2019.

The Mayor appeared to suggest that City Council's work on Watson Island over the summer had left their plans to address the Enhancement grant process off the to do list in 2018, noting that Council felt that they needed an additional year to develop the new process.

The Mayor added that the Council hopes to be in a better position in 2019 to provide for better news for the 2020 round of funding.

"We also realized that the enhancement grant process is actually broken, the actual application process itself and it hasn't allowed for any new applications or any increases in funding for any group, so part of the motion we passed was to completely reinvent and retool the enhancement grant process so that we can provide additional funding come next year for community groups" -- Mayor Lee Brain noting that Council will hold to current funding levels for 2019 but plans to amend the process for future years.

The Mayor also made note of a $10,000 community grant available in the community through Macro Properties, with Mayor Brain offering to provide a letter of support for the Arts Council efforts.

Mr. Gurney also offered up the availability of the Arts council to be part of City Council's review of the Arts Grant process.

The presentation from Arts Council and  City Council's follow up  commentary on the grant process can be reviewed from the City's Video Archive starting at the fifteen minute mark.