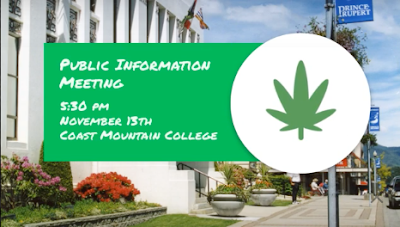 It's community engagement night on cannabis in Prince Rupert as the City of Prince Rupert hosts a public forum in the Multi-Purpose Room at Coast Mountain College on Fifth Street, with city staff and Council members seeking the feedback of the public on where retail business opportunities may be placed in the city.

Following some workshops on the theme, City staff and council delivered a recommendation that would see much of the downtown core listed as the only area of the city where retail cannabis locations would be located.

The blue print for the road ahead was delivered in early October with a presentation from the City of Prince Rupert's  Zeno Krekic, with the City Planner providing some of the highlights of the city's considerations when it comes to the licencing of cannabis retail options in the city. 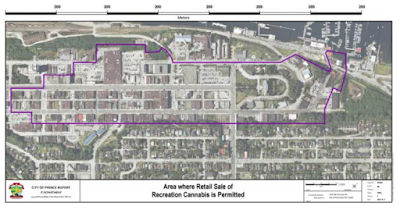 Tonight it's the turn for the public to share their ideas, through the community engagement session taking place from 5:30 PM to 7 PM at the college, with City of Prince Rupert representatives on hand to help explain the city's plans and to answer any questions that the public may have.

As part of the city's consultation there is also an opportunity for members of the community to provide for written comments on the city's cannabis planning.

Those contributions can be delivered to Rory Mandryk, the Corporate Administrator for the City of Prince Rupert at rory.mandryk@princerupert.ca

As well, the city has outlined its path ahead through a range of multi media options, the details of which are posted to the city's website

To guide you through the process ahead for tonight, the city put together the following video, which outlines the progress leading up to tonight's community engagement session.

City Council has been reviewing the prospect of legalization of cannabis for a few years now, the first discussion of the theme coming in 2017, the most recent conversation taking place as part of the October 9th City Council session.

Tonight's session makes for an opportunity for the public to make their views known for the new Council membership, that as they prepare to put in place their plans for retail business opportunities in the community.

The next stage for the city's deliberations on the issue will be through the Public Hearing process that will follow tonight's information session, members of the public will also have the chance to speak to the topic at that time, the Hearing has yet to be scheduled, but will take place as part of one of the Regular City Council sessions to come.

You can review City Council's somewhat winding path towards those decisions below: