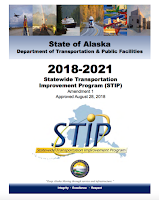 The State of Alaska is asking for feedback from its residents on a fairly ambitious State Transportation Plan for the years ahead, with road, ferry and air transportation projects all outlined in detail and ready for review.

However, when it comes to the planning for the Alaska Marine Highway System, while there are a number of projects proposed for AMHS properties up and down the Alaska panhandle, the review of the work to be done stops in Ketchikan once again this year.

With no mention of the refurbishment plans once proposed for the Prince Rupert stop for the Transportation service.

The plans for the AMHS terminal renovations were first outlined in the fall of 2014, but quickly fell afoul of Buy America provisions under the then Obama administration, seemingly things haven't improved much since Donald Trump took over the administration and put his own stamp on the America First concepts.

Since the Republicans claimed the White House the topic of the Fairview Terminal has rarely received a mention from Alaskan officials, the blue prints yet to be put into action.

As we noted on the blog in June, the final draft of the current Transportation review was handed in to the State Department of Transportation over the summer, which then sought more feedback from Alaskans, making a few amendments to the listings from those consultations.

The report now submitted for comment by the public is Amendment 2 and was finalized in August.

Those elements that have been changed address scope, funding, and scheduling issues on various projects around the state including new projects.

Alaskans have until December 17th to provide comments to the Alaska State Department of Transportation and Public Facilities.

Fifteen projects have been approved for the AMHS statewide, including work on berthing facilities at the Ketchikan Ferry Terminal. 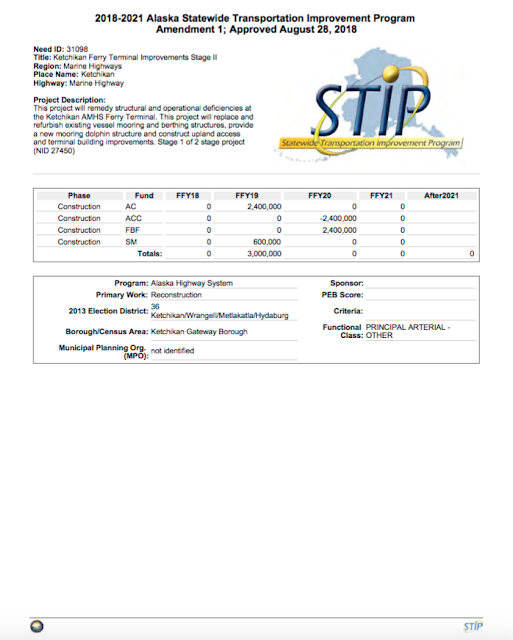 As well replacement of the main propulsion engines and subsystem upgrades for the AMHS vessel Aurora are also on the to do list as part of the Transportation plan.

The Aurora is a vessel quite familiar for those watching Prince Rupert harbour, making Fairview part of its schedule of service between the North Coast and Ketchikan. 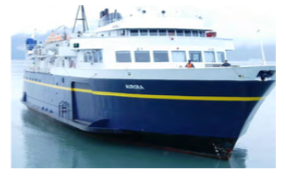 You can review the full document here, which provides a fairly instructive review of the scope of the Transportation issues that the neighbours to the north are looking to address over the next few years.

More background on the Statewide Transportation Improvement Program can be found here.

Email ThisBlogThis!Share to TwitterShare to FacebookShare to Pinterest
Labels: Alaska Transportation plan back for public comment by state residents