Mail box balloting for MLA Rice, who shares her priorities with constituents 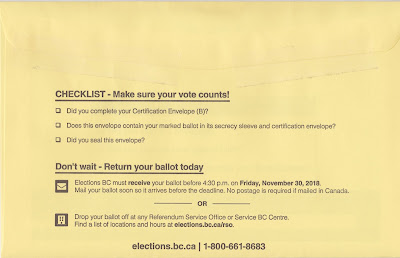 It's roughly about thirty steps from the front door of the Ocean Centre offices for North Coast MLA Jennifer Rice and the mail box in front of the Canada Post location on Second Avenue West.

On Wednesday, Ms. Rice made that journey to cast her vote in the balloting for the fall referendum on the British Columbia electoral system.


Not surprisingly for anyone who has been following the MLA's social media accounts and notes from the Legislature, Ms. Rice is casting her ballot in favour of Proportional Representation, marking the Rural Urban option as her preferred choice, followed by Mixed Member and then the Dual Member Proportional option.

With the Legislature proceedings in the midst of an off week so MLA's could return to their constituency for Remembrance Day, Ms. Rice has been filling in her days with a string of social media observations and multi media material to make the case for the Yes side of the referendum project. 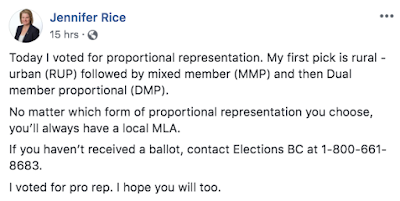 The North Coast MLA cast her ballot before her boss relayed a new tweak for what has already been a somewhat confusing rollout of potential change for the democratic process.

On Wednesday, Premier John Horgan indicated that he will be directing NDP MLA's  to block one of the version's of the referendum should it prove to be successful, that of the Closed list approach that could be put in place from the Mixed Member proportional option.

He instead is suggesting that should the Mixed member option top the balloting by months end, that he will ask NDP MLAs to support the open list model, which would see voters express their preference for representatives from party lists.

The Premier's move, to in effect revise one of the options, during the middle of the voting, has raised a few eyes, with a number of political observers noting that it could set the stage for a court challenge with some British Columbians having already mailed in their ballots.

Some further background on the Mixed Member proposal can be reviewed here.

Additional notes on all four proposals can be found here.

Elections BC has provided a video that helps to explain some of the background to the referendum process.

For a  review of the process towards the referendum and some of the notes of those who are in favour or opposed to the initiative see our political blog D'Arcy McGee, where we have been archiving items related to the referendum process.

For more items of interest related to Ms. Rice's work at the Legislature see our archive page here.