Referendum campaign not resonating with North Coast Voters, with but a 19 per cent return rate with one week to go before voting closes 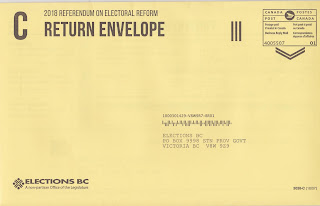 Unless there is a surge in votes coming in over the next week towards the new December 7th deadline, the final numbers from the North Coast will deliver a less than resounding response to the mail in electoral reform referendum currently underway.

As of yesterday, Elections BC had reported a return rate of only 19.3 percent from the North Coast, with only 2,857 of the potential 14,903 registered voters having bothered to send in their response cards to be counted.

The only area where participation in the vote is worse, is found in a number of Surrey area constituencies where four riding's report returns of 18.6% 16.8%, 16% and 15.6%.

The pace of the returns is somewhat more positive when it comes to returns from Skeena where 22.3 percent of eligible voters have delivered their ballots to Elections BC,  while the residents of Stikine do them one percent better, with a 23.9 percent return rate as of yesterday.

By comparison, the voters of Parksville-Qualicum are the most engaged in the referendum process, with a return rate of 42.6%, with 19,879 of the eligible 46,673 voters having returned their ballots to Elections BC.

The results can be reviewed from the latest update from the interim ballot package return review from Elections BC, which notes that of the 3,297,395 voters in British Columbia, less than 1 million (932,129) have had their ballots screened by Elections BC officials.

Beyond what appears to be a rather alarming lack of interest in the future of the province's electoral system, the slow nature of the return rates could come from the recent labour dispute between Canada Post and it's union CUPW.

With Canada Post recently noting that there is a significant backlog of mail in its processing plants across the nation, including one of its largest facilities in Vancouver.

The lethargic return of votes has been on of the key concerns for the opposition Liberal party, which has been asking the government to declare some kind of thresh hold level for the vote before any form of electoral change would be considered valid.

Something that the NDP government had not addressed prior to the break of the Legislature on Tuesday evening.

The tepid response rate from the North Coast comes despite what has been an ongoing push from MLA Jennifer Rice, who for the most part over the course of the last few weeks has featured her support for the NDP's  Proportional Representation options as one the more frequent messages delivered their her social media streams. 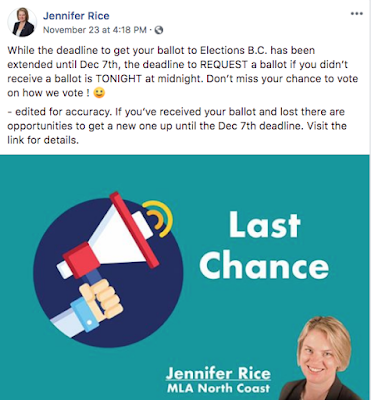 The original deadline of November 30th for the receipt of ballots was extended by one week last Friday, with the new deadline for British Columbians to get their ballots in now set for December 7th.

If you have not voted yet, you can drop off your completed ballot in the mail or take it to the Service BC office on Third Avenue West (across from the Credit Union).

You can review the latest news items related to the electoral reform vote from our archive page here.

A wider overview of provincial issues can be found from our political blog D'Arcy McGee.
Posted by . at 9:01 AM

Email ThisBlogThis!Share to TwitterShare to FacebookShare to Pinterest
Labels: Low return rates for election reform from the North Coast