BC Legislature breaks for Christmas with NDP looking to showcase highlights; but trapped by public's view of chaotic end


Premier John Horgan was looking to put the best light on the final day of the Fall session of the Legislature on Tuesday, and by most measuring sticks he should have been able to head off into the season of Christmas cheer in a fine mood.

Housing initiatives have seen the governing NDP making some headway on the long standing issue, with announcements made across BC delivering housing resources for a number of communities including Prince Rupert and Port Edward.

And with the government outlining the nature of an increasing surplus this fall, Finance Minister Carole James is proving to be a fairly steady hand with the province's books.

“We’re taking on the big challenges in our province, from the housing crisis to child care, while getting the Province’s finances in order,  ... The second quarter results show we can make B.C.’s economy work for everyone, while investing in people and providing strong fiscal leadership for B.C.” -- Carole James, Minister of Finance and deputy Premier.

There were some success stories in education as well with a number of new school announcements made by the NDP (though none yet for Prince Rupert) and the health ministry has made some significant announcements in the Northern Health region for both Terrace and Smithers.

Of major note to the Northwest, when it comes to economic development, the Terrace-Kitimat corridor received some positive news this fall.

With the Final Investment Decision for the LNG Canada's terminal project for Kitimat, a the NDP government was able to share in the accolades for having successfully delivered on one of the many LNG proposals for the region.

Though for the residents of the North Coast, the celebrations of the Kitimat area were a reminder of that the once promising future for LNG development for the Prince Rupert area has been all but dashed with the cancellation of a number or proposed terminal developments over the last few years.

As the fall session came to a close, the government released its review of the successful ticks of the To do list for 2018.

All told as the final day of the Legislature came to a close, the final tally of Bills Receiving Royal Assent looked as follows:

Yet for all those positive developments and an energetic agenda, two end of session themes have pretty well knocked all of that good news out of the spotlight and for the most part have framed the end of the fall work with more than a bit of curious suspicion from the public.

First there  is the final stage of an electoral reform referendum that has been marked more by the lack of interest that has been found among the voters, as wall as a significant amount of confusion of the process and the options that the BC NDP and Greens are hoping will find favour once the votes, whatever number they reflect are counted up.

The referendum campaign to this point has seen a twenty nine percent return rate,  (19 percent on the North Coast) and has also seen the Premier change one of the elements of the Pro Representation options at mid-referendum, something which provided the Opposition Liberals with more than a few talking points over the last  month.

You can catch up on the referendum notes from our archive page here.

The other issue that loomed large over the Legislature came last week, with a chaotic week at the Parliament buildings all after Speaker Darryl Plecas initiated an investigation into two senior Legislature officials, resulting in the surprising announcement that both had been suspended.

The story became even more controversial after it was disclosed that the investigation was conducted by a friend of the Speaker, hired to a newly created position by the Speaker in January.

Making the the situation even more confounding wast the revelation that Speaker Plecas had then recommended that his newly hired assistant be promoted to one of the suspended officials post.

In the end, more sensible heads prevailed and that did not come to take place, but the handling of the affair and the many unanswered questions related to it have clouded much of the final weeks of the Fall session.

The situation related to the Speakers' role in it all will remain unresolved over the holiday season, that as an RCMP investigation  also continues into the original concerns related to the two now suspended staff members.

The post holiday blues may follow the Premier upon his return to work in January when there will most likely be renewed calls for more transparency on the controversial events of November, a situation which may yet provide for more drama and a potential showdown with the Opposition Liberals over the fate of the Speaker.

You can follow all the latest twist and turns in that controversy from our political blog D'Arcy McGee.

North Coast MLA Jennifer Rice has for the most part spent the bulk of the last few weeks taking to her social media streams to get out the vote in favour of Proportional Representation options in the Referendum campaign, with a large volume of messages to constituents to share the preferred NDP themes on the choices available.

As for the other major story of the last week out of Victoria, Ms. Rice has not had much to say on the current controversy over the decision of the Speaker to suspend two senior Legislative officials, or the hiring of a friend of Mr. Plecas to a newly created assistants role.

In a session ending post to her Facebook page, Ms. Rice did however make note of  some of the success of the NDP agenda this fall, and noted how they get "a bit silly" at the legislature as the Fall session came to an end. 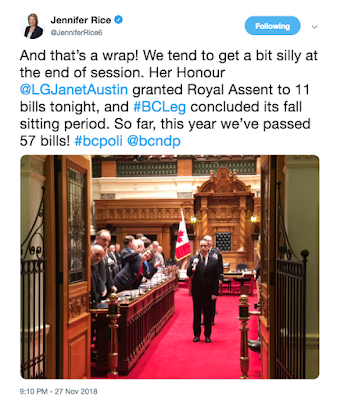 Constituents will be able to catch up with their MLA in December when she and Skeena Bukley Valley NDP MP Nathan Cullen host an Open House at their Ocean Centre offices on December 7th. 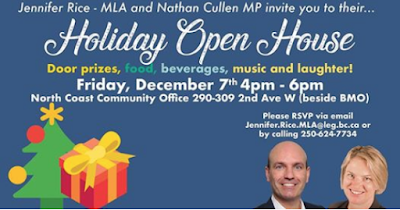 For a look back at some of her work in the Legislature this fall see our Legislature archive page here.

Email ThisBlogThis!Share to TwitterShare to FacebookShare to Pinterest
Labels: End of Fall Session